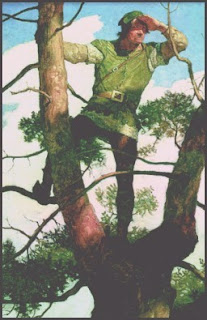 Watching The Adventures of Robin Hood (1938) again with the Film Studies class is enjoying a visit from a reliably entertaining old friend from childhood. I loved this movie before I ever saw it in color (we never had a color TV in the house until after I left for college). It is the perfect mixture of adventure, action, humor, a dash of politics--which could be said to be anti-authoritarian, except that Robin and his men are so attached to King Richard. And there is that music score--maybe the best ever written for a movie. My class had no trouble seeing the connections with Star Wars.

The reason for the film being in the syllabus is as part of the cinematography unit: Robin Hood is a fine representation of the first generation of 3-strip Technicolor films, with color being used lavishly, but nonetheless under exacting control. The inspiration for the palette and the Academy-Award winning production design seems to have been the 19th-century tradition of book illustration that adorned various versions of the Robin Hood legend, not to mention the works of Robert Louis Stevenson and so many other vigorous "lad's tales" of the late Victorian era. The example by N.C. Wyeth which decorates this post looks like a frame from the Warner Bros. film at a quick glance, the examplar is so close. (Of course it helps that Wyeth's draftsmanship, modeling and shadowing lend an uncannily three-dimensional aspect to the picture.) It must have been exhilarating for 1930s cinematographers who at best could model their films after photographs, line drawings, lithographs and such, to now be able to emulate fine painting in their work.
Posted by Lockhart at 7:19 PM