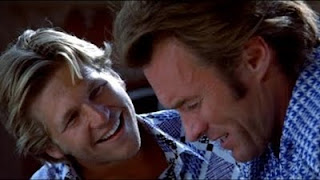 I recently finished the engaging but overlong, over- adulatory and premature biography of Clint Eastwood by Richard Schickel (it was written in 1996, before Eastwood's directing eclipsed his acting). The most interesting write-up of a film was that of Thunderbolt and Lightfoot (1974), which is, as Schickel wrote, a loopy low-rent heist comedy in which Eastwood lays back and plays straight back to an electric Jeff Bridges. This is Eastwood lite--not so much the tight-lipped, sharp-elbowed loner, but a fellow who has long been involved in left-handed forms of human endeavor (to borrow a phrase from Huston's Asphalt Jungle) and has learned to keep his head down.
Most surprisingly, the film is written and directed by Michael Cimino, who thereafter brought forth onto this continent the ponderous but thrilling Deer Hunter and the ponderous and tedious Heaven's Gate. (Cimino has made a few films since, but effectively he has fallen off the planet since Heaven's Gate's failure wiped out an entire studio, United Artists, which had been in existence for 62 years. That is literally an epic fail.) None of his other work would suggest that Cimino had the easy-going sense of humor displayed here; actually, there would have been little reason to expect it of Eastwood, other than the black humor of the Leone films, which could have been ascribed purely to Leone.
Today this film would have to be produced independently, directed by a Rian Johnson or maybe Soderbergh doing a downscale run. Of the big stars, only Clooney or Pitt would let themselves be overshadowed by a supporting player (and let themselves look ridiculous) as happens here. Only an independent film would let the heist go wrong in quite the way it does, nor let the tables be turned the way they are in the end. In one sense, it makes the 1970's seem long ago, in that this was considered a routine studio-star project, even with a brand-new writer/director. In another sense, the film seems eminently contemporary, with neither heavy production or heavy morality imposed on it by the ponderous studio system that reconstituted itself in the 1980's and 1990's. I'm reminded of Charley Varrick or Quick Change, dark comedies disguised as action or crime films.
Here's the best thing I can about this movie: this would be the perfect picture to lay around on a Sunday afternoon watching with my old man. He would really have liked it.
Posted by Lockhart at 9:00 AM