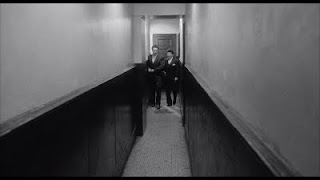 Just finished watching Raging Bull and The Long Voyage Home with the Film Studies class as part of our initial examination of black-and-white cinematography. We are moving on to look at color films now.

For both films, the value of black-and-white is its ability to abstract human experience, to take it from the specific and individual and lift it to a poetic level. It's not "this ship," it's The Ship; it's not "a fight" it's The Fight.

Both films focus on men in dirty, brutal, rough occupations, yet both films can be said to be beautiful. Long Voyage is almost too beautiful for its own good. Narrative flow is overwhelmed by the sensuous visuals, a syndrome to which Ford succumbed completely in his gorgeous misfire The Fugitive. (Not the Harrison Ford film.) And yet the visuals are not irrelevant--their romantic beauty explains why these men cling to this unpromising calling in life.

As for Raging Bull, black-and-white does not disguise the brutality and blood, but it transfigures them (in some cases, literally--at one point a boxer's body is presented as if being prepared for burial). To those who say the unreality blunts the pain the characters are experiencing, I say that color would not increase that sense at all and would in turn diminish the way the images transcend and universalize the events. But this is a subject of endless debate, as evidenced by Stefan Kanfer's celebration of black and white in City Journal (though I believe Kanfer is motivated by nostalgia more than aesthetics).

There is no doubt, however, that deep focus (as shown in the illustration above) means a lot more in black and white than it does in color--perhaps it is the sense of "something" looming up out of the dark "nothing."
Posted by Lockhart at 9:12 AM