Why are you telling me this? 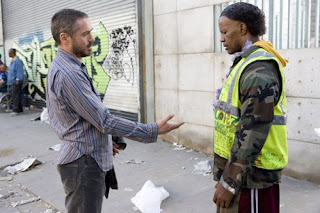 Give the makers of The Soloist (2009) credit: they did not crank out another piece of phony "Life can be good" uplift. They adhered to the ethic of the journalist played by Robert Downey, Jr. and engaged in honest journalism. Which would have made a documentary far more valuable than this well-meaning slog through a string of non-events.

There is no reason to belabor this. The film is not without merit. It is true that Robert Downey, Jr. and Jamie Foxx give excellent performances that would be very impressive in any acting laboratory. And the expressionistic techniques used to give a sense of what the inside of a schizophrenic's head is like are very effective--overlapping voices and swirling, distorted images. But the film would not be much different if it had ended at the half-hour mark than it is at the end of an hour and three-quarters. There is no narrative drive, no push forward. The characters don't seem to know or care where they're going, so why should I? In short, the film fails to address the question that every story must address, "Why are you telling me this?"

The only continuing significance of this film is that its failure (which was exacerbated by a reported $70 million negative cost--probably due to a long development process) along with that of State of Play, occasioned talk that the audience for mid-budgeted studio-produced serious adult films had disappeared, and that this market segment was best left to independent producers.

First, people in the industry should be aware that the audience knows or cares not if a film is produced with studio or independent backing. It is impossible to detect these days. They should also know that the audience for poorly made or dull films has always been fairly sparse, and the best path to financial success would be to have better scripts written and to film them.

Next year there will probably a mid-budget film for adults which is a smashing success and everyone will run through the streets to hail the discovery that grown-ups like movies, too. Amnesia is a film executive's (and journalist's) perpetual malady.
Posted by Lockhart at 1:48 PM