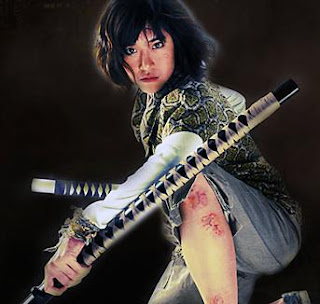 A few years ago, I (figuratively) flipped over a martial arts film from Thailand called The Protector starring Tony Jaa. It had one of the most brilliant and demanding action scenes I had ever seen. The hero is penetrating the villain's lair, a large casino-club of four stories wrapped around a large round atrium. Jaa runs up the stairs, fighting with various henchmen all the way up, stopping at landings, tossing villains over the rail, all the time, running up, up, up...all in one continuous shot. You could even see his fatigue as the end of the take neared--a fatigue which made his skill all the more impressive.

Director Prachya Pinkaew returned in 2008 with a new star, a tiny young woman named Jeeja Yanin, who is the most limber and indefatigable movie star you are ever likely to see. The film is called Chocolate, which is an utterly terrible title since it does little to describe the film, and will probably cause it to be confused with many similarly titled films, such as Chocolat. Presumably the title refers to the heroine's fondness for an M&M sort of candy. She even practices her martial arts skills by popping the candies into her mouth in amazing ways.

The premise is a mixture of the tried and true and the original--a daughter strives to save her dying mother by collecting money owed the mother from various shady characters and their apparently limitless loyal henchmen. (Why has a flunky in one of these movies never seen the hero's dazzling talents and just said, "I'm out of here?" Why do they always stay and fight? For a paycheck? These guys are idiots!)

But the original notion, beside the novelty of a female martial arts star--although Michelle Yeoh and others blazed that trail over 20 years ago--is that the girl is autistic, and has acquired her fighting skills via television and video games. She has almost a magical power of observation, picking up the characteristic motion of an autistic opponent within minutes. I should think this character will be very popular with mentally challenged people everywhere. I would advocate showing it in school, except that it is a very violent R.

And finally, there is terrific fight choreography here Panna Rittikrai, who shows herself to be, like Yanin, to be the spiritual child of Jackie Chan. When I was a teen, martial arts films were always the same boring routine--the challenge, the training period and the carefully staged fight in a designated fighting area. Jackie Chan took martial arts out of that ritual, integrated the fights into plots, using props and the specifics of settings. And in doing so, he completely transformed the genre. It is impossible to make a martial arts film and ignore Jackie, any more than you can make a Western and ignore John Ford. The climactic fight in Chocolate displays this influence in spades, with a brilliantly designed set of balconies, rails, electric signs and train trestles.

Jackie may be approaching the day when he must retire from performing, hopefully to direct the next generation of Jackies, but his mark on the action film and on film as a whole has been indelible.
Posted by Lockhart at 9:10 AM