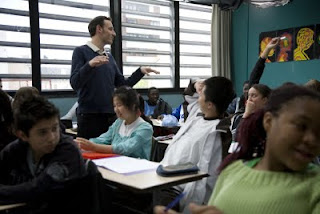 I was warned at my library that a number of other borrowers had been bored by The Class (2008), a French film about the dynamic inside a Paris classroom of students over the course of a year. The students correspond in age to a freshman or a sophomore class here, and the class is a French class--that is, literature, vocabulary and grammar. That's my racket, only I do it in English

So naturally, I had a keen professional interest in the film. And happily, it is not another melodrama of the dedicated young teacher at the beginning of his/her career overcoming students hostility, administrative hostility, etc., etc., breakthrough, yada yada, change kids' lives forever, yada yada, fulfilling, yada yada

This teacher has been at it a while, although he makes a lot of rookie mistakes in classroom management, which I presume are done to heighten the conflict. And the struggle is not to get students to learn some vital information, like the test preparation in Stand and Deliver. In this case he is struggling to get them to think, mostly about themselves--not in narcissitic way, but to develop some perspective and see themselves as others do. No, we don't see him giving tests and grading assignments--why would you want to? Instead, we see him pushing students to explore their own minds

The film was created in such a unique way that a number of early reviewers mistook it for a documentary, although it is difficult to see how that could be--it is too elegantly structured and shot for documentary (handheld camera notwithstanding). But it is based on an autobiographical novel written by the man who plays the teacher, François Béagaudeau, and improvised by a group of students who prepared for a year with the director, Laurent Cantet, with whose previous directing work I am unfamiliar

One of the most uncomfortable aspects of the film is the uneasy mix of ethnicities which are pouring into Europe. Students were from North Africa, the Middle East, Asia, all struggling to find a foothold in France, which boasts a long, deep, proud culture of its own (as contrasted with our magpie American culture). Students deny being French or even wanting to be French. Ethnic animosities are played out in the classroom, reinterpreted through the usual adolescent posing and conflict. A troubling prospect for us melting-pot-mosaic Yanks

Another aspect that was difficult to take was the number of important decisions made by committees, some of which include students, who hear teachers discussing other students. Clearly, the French are just asking for trouble--which does result from the students being present at such a meeting, although not in the way you'd expect. This is especially delicate when discipline decisions can result in deportation

My attention was riveted for all 130 minutes. There was a lot of talk, almost all of it in one classroom, one meeting room and a playground. There was no melodrama, no music track, no cheap uplift, no easy answers. I suppose some might be bored by the absence of those elements, but I could not look away for a moment.
Posted by Lockhart at 8:11 AM