Film as a Cornell Box 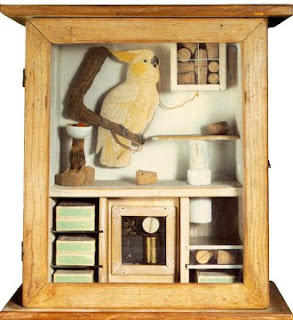 Just finished Alfred Hitchcock's Rear Window (1954) with the Film Studies class. Probably one of the most written-about movies anywhere, anytime, and I have no desire to add to the blather. (We look at the film to study its employment of the Kuleshov effect, the creation of association by juxtaposition in film, which Hitchcock himself explains nicely here.

Two things struck me this time around. One is the almost complete dissociation between the soundtrack and the important action of the film, especially in the second half. The first part of the film has a lot of chatter, much of which is really unnecessary and inefficient characterization. But once the story catches fire, the pictures take over, and the soundtrack becomes almost irrelevant. Almost as though Hitchcock was thumbing his nose at the talkies.

The other was that the stack of apartments reminded me of a Cornell box (see example above). Joseph Cornell made a form of three-dimensional collage, often enclosed in a box. All the items in the box were thematically and visually related. And that's what we have in the courtyard in Rear Window. We have the visual cohesion of the courtyard setting itself, and all the stories in each "compartment" is about relationships. (How very satisfying to see Miss Lonelyhearts with the Songwriter. Only the newlyweds don't end up happily ever after.)

Satisfying. That's a word my son uses for well-made stories. Just the word for Rear Window. Satisfying.
Posted by Lockhart at 11:45 PM