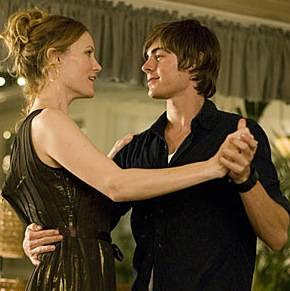 Not much need be said about 17 Again (2009) an acceptable Friday night entertainment. Just two things really. I applaud any film with an implausible premise which does not waste time over trying to make it plausible or explaining it in any way. Poof, our main character is 17, poof he's 37. No big deal. Get on with the story. I always objected to the huge amount of time It's A Wonderful Life wastes explaining itself. I want to shout at the screen, "We get it, we get it, get on with it and make your point." Some snappy editing by Padraic McKinley helps a lot.

Secondly, Zac Efron is a full-on movie star. Independent of his teen heart-throb status, he speaks, carries himself and--most importantly--moves like a man able to and entitled to pick up the entire movie and carry it on his back. Granted, in this case, there is not so much carry. But let me repeat, he moves beautifully--not just dancing--his hands, his whole carriage. And that is an asset not to be underestimated in film stardom. They are moving pictures after all. He deserves to be up there a long time.

Only one question: why does a piece of piffle like this require six credited producers?
Posted by Lockhart at 10:13 PM