Hurry up, gang, there's another Chester Morris movie on! 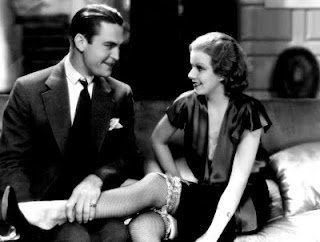 Red Headed Woman (1931) is some odd duck of a pre-Production Code movie. I viewed it as part of a package from Turner Classic called "Forbidden Hollywood." These are films that were so lurid or salacious that they couldn't have been released once Hollywood began organized self-censorship in 1934. But this one is not as racy as it thinks it is. Harlow, as a gal trying to sleep her way into polite society is more annoying than sexy. In the climax we are shocked to see her shoot her husband as he drives away with his first wife (and true love) and crashes into a streetlamp. But then he is all better and she is never prosecuted--so the whole thing was just completely pointless. Nowhere near the juice of Baby Face (discussed earlier in this blog).

What pleasure that can be taken from this limp film comes from the crisp, low-key and rather modern acting of Chester Morris. As you can see, Morris had large round eyes, a forward-thrust chin and pushed-in nose that made him look a bit tough for the society swell he is supposed to be, and he graduated to tough cops in the next decade. In the 50s he turned to Broadway and live television. Recently I saw him in a television play called Arena in which he plays a hard-bitten but still decent and sensitive old political operative. His work had none of the ham and artificiality of his contemporaries--he could step right into a David Mamet play today, so easy, natural and strong was his work. Trust me, you could do worse than checking out Chester Morris, even in one of his Boston Blackie cheapies.
Posted by Lockhart at 11:10 PM