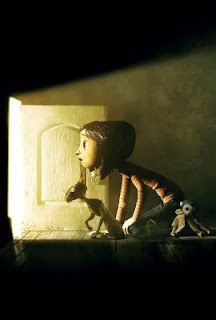 Coraline opens an important chapter in animation and it has nothing to do with 3D. Rather, a new independent animation studio has opened up, not under the control of one of the major distributors, such as Disney or 20th Century Fox. Most importantly, that studio, Laika, which began as an animation production house and had some involvement in the CGI animation film Corpse Bride, has committed itself to the singular vision of Coraline's adapter and director, Henry Selick, best known as the director of The Nightmare Before Christmas.

Although it is based on a book by Neil Gaiman, Coraline was not really an established property in another medium. Laika was truly betting the house on Selick more than anything. And according to what I read, he came through--at least Laika was so satisfied with the film, it has suspended work on all CGI projects and will continue with stop-motion only, at least for its feature projects. Cartoon Brew's opening weekend post about Coraline also focused on the degree to which this film is about a director's vision.

The Disney classics were an expression of classical Hollywood. They were group efforts, led by a producer-entrepreneur, much as Gone With The Wind's real creator is producer and studio owner David O. Selznick. (How many people think GWTW was an MGM picture, because they distributed it--it was really an independent production.) As the classical era drew to a close, writers and critics noticed that great films were often the product of a single artist's vision (usually the director) rather than that of a committee of craftsmen. This, in a grossly oversimplified description is the auteur theory.

Auteur theory seems to have reached animation. It's hard to remember or identify who directed a Disney film of the Golden Era. But with Chuck Jones as the founding father (and to a lesser extent Bob Clampett and Friz Freleng) of personal expression in cartoons, today we have John Lasseter, Brad Bird and most notably Henry Selick, who has been given the freedom to make this dark, dark fable--no more intended (solely) for children than The Triplets of Belleville. And the bet seems to be paying off.

There are some other interesting aspects. Some have noted that the 3D in this film is uniquely organic, neither pasted on, nor employing grotesque effects. David Bordwell has an interesting note as to how this has shaped the entire production design.
Posted by Lockhart at 9:37 PM