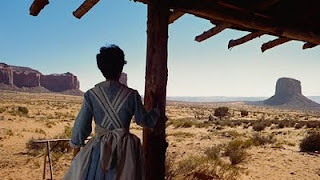 Directed by John Ford (1971 and 2006) is, obviously, a documentary about the man proclaimed the greatest American filmmaker the way Art Tatum is declared the greatest pianist in jazz. There really isn't room for much discussion on this point.

I was hoping for a film that would provide a general overview and introduction to Ford's greatness as an artist. I understand that's difficult to do. Ford was a classicist, for whom what is not said and not shown is at least as important as what is, where form and ritual are observed, and drama can be buried and encoded in the positioning of the characters in relation to each other and the landscape, their bits of business, the averted eyes. You are not going to get the long confessional monologue in the films of John Ford--those are not his people. So he can be a difficult artist to articulate to the new viewer, especially those born since the death of the Western as a healthy commercial genre.

The film starts with discussing Ford's personality quirks, which is odd when the film hasn't even made the case for his greatness yet. The doc is a blend of materials from a 1971 AFI tribute (Ford was the first AFI Life Achievement Award recipient) and new material created for Turner Classic Movies, with 1971 narration by Orson Welles and onscreen comment by the film's director Peter Bogdanovich. The old material includes well-shot and well-delivered interview material with John Wayne, Henry Fonda and James Stewart--Wayne has never been so sincere and convincing, as well as a famous tight-lipped non-interview from the great man himself. The new material is even better at times. Although Clint Eastwood's material is cursory and disappointing, Steven Spielberg, Walter Hill (who has probably the deepest and most well-thought out insights in the film) and (of course), the High Priest Martin Scorsese all have enlightening things to say.

And it is Spielberg who, 45 minutes into the film, at last kicks it into gear with a story of meeting Ford in his office in the early 1970's, and Ford's pointing out to Spielberg the importance of the height of the horizon line in composition (top or bottom of picture, never middle). This finally gets into some matters of Ford's pictorialism, and we finally start to get some analysis of Ford's picture-making technique. There is an examination of his penchant for American history and finally we get to the heart of the matter, the depiction of family. And then we see a succession of fathers and mothers and sons, good and bad, some close, some bitterly separated. And as I watched so many familiar scenes, Tom Joad's departure in Grapes of Wrath, John Wayne's surrogate father figure in She Wore A Yellow Ribbon (an especial favorite of my dad's), the would-be family man Ethan Edwards in The Searchers but most especially the death of the beloved father of How Green Was My Valley, I felt all the love and respect for my own father, gone just this past June well up in my uncontrollably. For me, at least, even chopped up in little bits, John Ford's work touches something very deep, whether a memory or a wish, it is a powerful vision of how life could be lived.

I wish the film could have been more definitive, but it has a lot to recommend it, at least for those already familiar with The Master.
Posted by Lockhart at 2:50 PM