If only they had made a documentary about hecklers 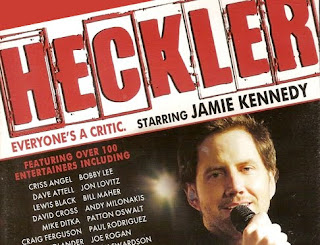 Heckler (2007) is a good idea for a movie. And this low-budget doc gets off to a very good start. There are 15-20 very sharp and funny minutes (as one would expect in a film by and about stand-up comics) about hecklers, their effect, their motivations and how to squelch them. Then the film drifts to a discussion of critics, both well-credentialed ones and the cranky basement bloggers. There is a lot of discussion of the emotional harm to artists created by hostile critics, many of whom engage in ad hominen attacks.

My question (and it is addressed very briefly at the very end of the film) is, why give those critics that power? Why absorb what they say? I know that artists are by definition sensitive, but you have to learn to turn that off in order to create without distraction. And the critics only have as much power as other people give them. Ignore 'em!

Give Jamie Kennedy points for being a good sport. He seems to have gone out of his way to seek abuse in this movie--it is not possible that his feelings are as hurt as he portrays, given the deliberate way he baits his critics and hecklers. In some stand-up sequences he seems to have purposely created bad material in order to be heckled, and at one point he is pelted with some unidentifiable objects by the audience--a sequence which has to have been staged.

And the fact is, Jamie Kennedy's movies are poor. They were badly written to begin with, but film is a misuse of his talents--he is a brilliant provocateur who requires live unsuspecting targets for his best effects. Sort of a milder Andy Kaufman, who, like Kaufman does not hesitate to court hostility, frustration or confusion rather than laughs. Too bad this film is such a misfire.
Posted by Lockhart at 8:25 AM