What makes a story want to become a film? 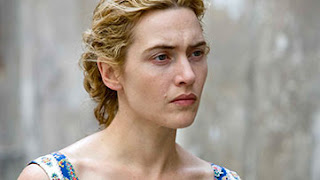 For someone as engaged in films as I am, it's a little embarrasing that I have only just gotten around to The Reader (2008), which was released during Oscar season last year. Director Stephen Daldry is one of the crop of British directors who shuttle between theater and film; in Daldry's case, he spends most of his time in the theater, having spent much of the last decade transferring his first feature film, Billy Elliot, to the musical stage, with the benefit of an Elton John score. (His only other feature to date is The Hours, so Daldry is batting 1.000 so far.) The Reader and The Hours are both from screenplays by David Hare, whose day job is playwright, so he is also a theater creature.

The Reader does not break new ground cinematically, nor does it proclaim a new individual voice. It is a film that revolves around words and ideas, ideas like guilt and responsibility. It is based on a novel, adapted by a playwright, a playwright who's not afraid of lots of words. (One of Hare's plays, Via Doloroso, is a 90-minute monologue the author performs himself.) Clearly, this story is sufficient in a purely verbal form--it was, after all, a novel; it could be, with the exercise of some theatrical imagination, a play. Why did it ask to be a film? What justifies its existence as a film, rather than some other narrative form?

Simply put, Kate Winslet's face. Kate Winslet's face is justification for almost any movie. Pace Meryl Streep fans, I believe Winslet is the most convincing and versatile female actor working on the screen. (Cate Blanchett is her nearest rival.) One piece of evidence for that opinion is that I have no idea what I would expect Winslet to be like if I met her in what we laughingly call "real life." She has no persona aside from her characters, none but a fiercely hard-working actor. In The Reader, her words are frequently inexpressiveness, masking or denying her character's inner state. But the face is a rich and detailed map of an entire landscape of emotion, hurt and fear and dread and pride and desire and anger and a dozen more feelings, all clearly transmitted in a single look. How amazing that Winslet was a mid-production replacement for Nicole Kidman, and had little or no time to prepare!

And if further proof is needed that the human face is an intensely cinematic object, I need only note that the film loses a bit of its power as Winslet's face accumulates old-age make-up which freezes and hides much of the face. Our attention is directed to Ralph Fiennes rather frozen face--Fiennes' acting is concentrated in his rich voice rather than his face. And then the film regains its visual footing as we turn to Lena Olin in the final sequence (I confess I did not notice her stunt appearance in the middle of the film, playing the mother of the character she plays at the end.) And Olin has another of those faces, transmitting anger and contempt behind a mask of bland politeness. I believe her work is the reason the film concludes so powerfully.

Which is not to say there are not other visual delights. Two of the best cinematographers on the planet are credited, Chris Menges, and a particular favorite of mine, Roger Deakins. By accident or design, there is virtually no flat or solid color in the film--everything is mottled, dappled, covered with patina or distressed. The light is similarly broken throughout. There are a few ingenious flourishes--I especially like the view of Winslet from the other side of a train platform: as each car passes, we glimpse Winslet between with a slightly different expression or posture, as though flipping through a deck of still photos.

Reader appears to be a Holocaust film, which it is not--the Holocaust is useful shorthand for questions of guilt and responsibility. It appears to be a story about words and readers, like 84 Charing Cross Road or Finding Forrester. But what it is truly about is the failure of words, because ultimately neither of the principal characters, though they each know thousands and thousands of words are unable to say the few words necessary to relieve their own pain, shame and loneliness. And people who are speechless are ripe subjects for cinema.

One last quibble. There is a beautiful film score by Nico Muhly, a new name to me. The problem is that there is too much of it, which is not the fault of Muhly, but director Daldry. I wish he had, rather than laying down music like a wall-to-wall carpet, trusted those telling silences.
Posted by Lockhart at 8:56 AM