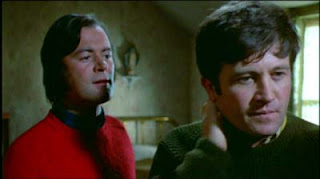 Philadelphia, Here I Come! (1975) is a respectable example of that despised genus, the faithful filming of a stage play. This particular example has one of those especially troubling conventions of the live theater, in this case, an alter-ego for the protagonist, seen and heard only by him, but for the purposes of film, portrayed by an obviously real flesh-and-blood actor. Brian Friel, who wrote the screenplay from his own play. deals with the problem by ignoring it. Clearly, he wanted us to hear the thoughts of his main character and he didn't want an echo-y voiceover, but instead we have the cinematically leaden "invisible" character wandering about with his sometimes intriguing but often redundant chatter. I don't know what the filmic solution would have been, but this stage device pulls down a very nice little film like a bit of mold behind the wall that you just can't get out.

It doesn't help that the actor playing the alter ego has an absurd pair of mutton chop sideburns and thinning hair on top, which makes it look like he is wearing a hoody made of hair.

It's an unusual film for its era, a film about Ireland actually made in Ireland by Irish actors. Some posters on imdb.com complain about the welter of different Irish accents, and its a legitimate point, but it ignores the fact that the film was made in 1974, when there was not the kind of pool of Irish acting (or production) talent there is today. (It was evidently made independently and picked up for distribution in North American by the American Film Theater, a 2-year experiment in filming plays for limited theatrical runs.

But to get to the point--there is a perfectly lovely and completely cinematic moment in the film: the protagonist's memory of a moment of shared happiness between himself and his taciturn father. Later we learn that this event may or may not have happened or may have been different than the boy remembered. In any case, the flashback is not reliable. I would like to know when flashbacks became as unreliable as other modes of narrative. In Classical Hollywood (1920-1960), flashbacks were understood to be reflections of events as they actually happened. They were used to clear up misunderstandings or provide background to understand present events. But now they are as likely to be a lie or an innocent confabulation as anything else a character says. It gets harder and harder to feel the ground under your feet, cinematically speaking. And perhaps that is a good thing; at least it's a more accurate representation of life as we experience it. (Remind me later to discuss the unreliability of memory...)
Posted by Lockhart at 10:48 AM