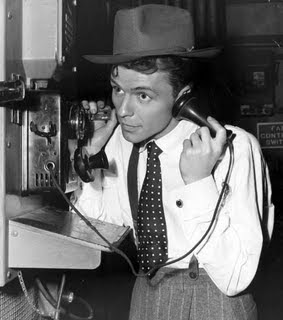 So last week I watched Frank Sinatra in his first acting role in Higher and Higher. Its unexpected quality inspired me to seek out its successor, a musical comedy remake of Room Service called Step Lively (1944). Once again, I was anticipating some real cheese along the lines of Warner Bros. backstage epics of the 30s. Well, this partook of the pace and spirit of those pictures, but this one was really funny with original and tuneful songs. Both Higher and Higher and Step Lively showed real skill in the deployment of reprises, using them to move character relationships along, and show different aspects of the songs by changing singers, tempos and arrangements. Really got a chance not only to like a song, but to feel like you knew it.

Again, Sinatra was far better served by playing 3rd banana in a real farce plot then he was in his MGM roles in films like Anchors Aweigh and On The Town, where he plays second leads who are really fifth wheels--that is, they have absolutely no plot function, and Sinatra is just brought along for his pipes. In Step Lively, young Frankie, still playing innocent bumpkins, is the naive playwright from Room Service. (He gets to write "Godspeed"--in the 1938 Marx Brothers film the play's title has been censored to "Hail and Farewell"--but he gets his name changed from Leo Davis to Glen Russell. Sure, Frank would be unbelievable as a Leo, but is he more plausible as a Glen? I ask you.)

The numbers are breezy and daffy, George Murphy is a peppy and energetic lead, Walter Slezak is an out-of-the-park off-the-wall genius as Murphy's quasi-corrupt, quasi-incompetent hotel manager brother-in-law. Many of his lines are far better than anything found in the stage original. Oddly, this loosely assembled remake manages to retain the shape and outline of its source without using any of its specific materials, and even improving the play in places. Once again, the critical emphasis on classical narrative forms has too easily dismissed a first-rate brand of vaudeville. If you like Sinatra and full-throated musical comedy (not musicals, but musical comedy), this is a very agreeable 88 minutes.
Posted by Lockhart at 8:53 PM