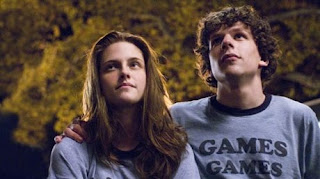 I'm a decade too old to share in 80's nostalgia. I was busy starting a family and a career and my recollection of that time was that between the music, the fashions and the politics, Americans were ready to accept any pile of horsehockey that was thrown at them. The zeitgeit of the me-decade 70s was nauseating enough, but the mantra of the 80s seems to have been, "whatever."

Therefore I can approach a film set in the 1980s, such as Adventureland (2009) without any patina of nostalgia and say it's a pretty decent coming-of-age romance. My recollection is that the film had a disappointing release earlier this year, because it was marketed as the next film from the director of Superbad. And while Bill Heder and Kristine Wiig are on hand to provide a little Second City-SNL vibe, they are in fact minor characters. And there is no evocation of the cheap slapstick, T&A teen comedies of the period.

So the question is, why the 1980's? Evidently this was an autobiographical piece, and the writer/director's own youth was some 20 years ago, but there is absolutely nothing in the story that demands this time period. I could have told a similar story of my own college summer job in the mid-1970's. I'm sure my kids and their friends could tell the exact same story in contemporary terms. Meanwhile, the clothes and hair just clouded the issue, as their very appearance seems to call for irony and ridicule that this sweet little film refused to traffic in.

This is where producing comes in. It cost the film extra production expense and difficulty to create the retro setting, and it brought on confusion in the marketing phase of the film. It is hard to see the upside of the 80's setting--it only made a difference to the director, who like so many directors on their commentary tracks, spends most of the time discussing the records they selected for the soundtracks. Why don't these guys just make a mixtape (yes, there's one in the plot of the movie) and leave their nostalgia home?

Even the amusement park setting was wasted. This story would have been exactly the same at a burger joint. It appears as though the director felt this was a more unique and individual picture than it actually is--there's really nothing startling or new here, although it is well-acted and pleasant throughout. This feels like a classic case of premature indulgence of auteurism. Which is not to say it's not a nice little picture--just a terribly misleading one.