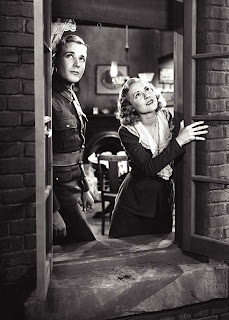 I finally finished Forbidden Hollywood Volume 1 from Turner Classics by viewing the original 1931 Waterloo Bridge, directed by James Whale, most famous for Frankenstein and The Bridge of Frankenstein, and portrayed by Ian McKellan in the excellent Gods and Monsters. Whale didn't go into films to make horror pictures, but success can point a person in strange and unanticipated directions, and Whale, a semi-closeted homosexual seemed to be drawn to stories of outsiders, people less than completely acceptable to the world at large.

In Frankenstein and Freaks the outsiders were terrible to look out, but in Waterloo Bridge Mae Clarke has the kind of glowing every day beauty of a Jennifer Aniston--you could have known this girl, even if you couldn't have actually dated her. Clarke and her opposite, Kent Douglass (who under the name Douglass Montgomery had pretty undistinguished career) give astonishingly natural and relaxed performances in high contrast to the stagy shouting sort of histrionics to be found in the Frankenstein films. (Frederick Kerr, the burgomeister of the Frankenstein films appears here as the boy's stepfather--he had a near-genius for playing lovable old codgers, effortlessly zig-zagging between grumpiness and generosity.) The first half-hour feels extremely contemporary, and it is only when the plot requires that the girl, through pride, refuse to accept money from this man because she likes him (it would be no problem if he were a John), that the age starts to show.

There are no great cinema breakthroughs here, no astonishing technical feats. But there are some lovely cinematic story-telling flourishes. After the fallen woman and her boyfriend's mother have spoken, and they agree that there can be no marriage, the girl leaves the room and we are led to wonder--how does the woman feel? After all, her boy is sincerely in love (he has no idea that his girlfriend is turning tricks) and she doesn't want his heart to be broken. But clearly, this match is impossible. She sits at her vanity, her face turned away from us. Then she picks up a small handkerchief and silently dabs her nose. Fade out.

And then there's the white fur. At the beginning of the film, Mae Clarke's character is a gold-digging chorus girl, and we see her flaunt the new white fox stole her boyfriend has given her. Later in the film we see her don the stole to hit the streets and it no longer looks fresh. In the final shot (I'm trying to avoid a spoiler here), the fur lies discarded on the street, and its shabby, mangy condition gives silent testimony to its owner's own fall from grace.

What a 1931 Mae Clarke had! Besides this film, she was the prostitute who commits a gaudy suicide in The Front Page, she got a grapefruit shoved in her face by Jimmy Cagney in Public Enemy, and was carried off by the Frankenstein monster! Yet by 1967, no one remembered her in the business, and she was thrilled to get a walk-on as an office worker in Thoroughly Modern Millie. A brutal business, kids.
Posted by Lockhart at 11:18 AM