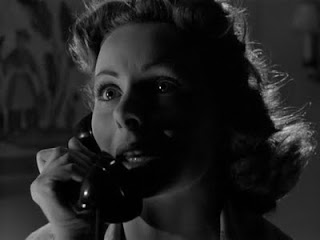 I am a fan of film noir and have see most of the basic canon. (You can go here to check how many you know.) 20th Century Fox Home Video has been one of the most active distributors in promoting noir as a brand, with special packaging and commentary tracks on all their noir titles. And 20th has a a lot of good ones, especially Otto Preminger's work in the late 1940's, such as Where The Sidewalk Ends.

But noir has evidently reached the point where it is a profitable and successful brand, and as sometimes happens with such things, the brand is being applied to products that do not fit in the hope that such a misidentification will boost sales. So I borrowed a copy of Dangerous Crossing from the library, as it was clearly identified as a Fox Noir. It is no noir. It has neither the worldview nor the visual flourish of a noir, other than a few scenes of low-key lighting and some very nice fog effects. For the rest, it is a standard factory-produced suspense piece, a "locked room" mystery in which a new bride's husband mysteriously disappears just after they board a cruise ship. The twist ending is not bad, and everyone--actors, camera, editors, composer, does a good, everyday, journeymen work.

But Fox needs to be more careful lest film buffs new to noir mistake a film like this for the real thing and conclude that noir is some kind of random label for crime films and miss the depth and richness of the style/genre that is presently attracting more critical attention to films of the Golden Age than any other.
Posted by Lockhart at 9:21 AM