Thinking makes it so 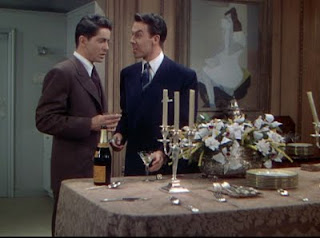 Our Film Studies class looks at Hitchcock's long-take film Rope (1948) as an object lesson in what could happen if you dispense with editing as a filmmaking tool, and rely entirely on mise-en-scene. (Film teachers take note, the film fits in either unit.)

Much has been written on how many cuts are actually in the film and the various technical challenges in its making, and you can find those elsewhere on the internet or in those funny stacks of attached papers called books; I can add nothing original to that corpus.

What surprises me each year is how this 80-minute gabfest grips my 16-to-18 year-old students without gunshots, car chases, kung fu or--wait for it--MTV-style editing. (The use of the term "MTV-style editing" is a reliable bellwether for identifying cranky old curmudgeons who want things, including aesthetics, to stay as they are. Such persons are so deeply unaware of the natural order of the universe as to be beneath contempt.)

I read recently that the film may have been inspired by a 1939 live broadcast of the play on which it is based, and I confess shamefacedly that it never occurred to me before that the film feels a lot like a live television play. Paradoxically, a live play would make use of more varied camera angles and would be able to cut in close-ups, as live TV plays employed three or more cameras which could constantly vary perspectives. Rope is more ascetic still, using a single camera. Close-ups must be simulated by dollying in or having an object brought to the foreground. None of the associative power of what Hitchcock himself called "pure cinema" (mostly meaning editing) can be brought to bear.

And still Hitchcock, rightly called the master of suspense, teases out the tiny bit of information that he has to dispense at such an engaging pace, that the film plays. It shouldn't--in fact Hitchcock considered it a failure--but it plays. One student in my class named it one of his all-time favorite films and planned to get his own copy. I can say that it does bear repeated viewing and study. The film has some corny acting and some of the intended "high style" small talk is tedious. But the power of narrative, and the ability of subtext to keep that narrative going draws the audience in. (The screenplay was by playwright Arthur Laurents, who reportedly instructed later collaborator Stephen Sondheim in the use of subtext.)

And perhaps when narrative is moving forward in a smooth, unimpeded manner we become so unaware of editing, that we are equally unaware when there is no editing. Perhaps.
Posted by Lockhart at 10:14 AM