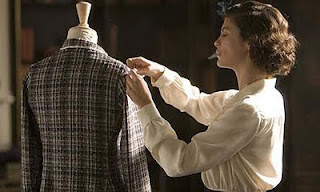 Let's try some titles: "Einstein: Patent Clerk of Destiny"; "Ulysses Grant: The Drygoods Store Years"; "Chuck Norris: Just Another Skinny Wimp." You want to see any of those? Me neither. Sure, those biopics in which we see the historic figure taking those steps which will prepare them for greatness are interesting, but that's not what I'm talking about. I'm talking about a nonentity who later is known for some remarkable achievement, but during the course of the film itself is and remains a virtual non-entity.

In Coco Before Chanel (2009), Coco is not a complete non-entity, because she is, of course, Audrey Tautou, who cannot help being beguiling any more than Yao Ming can wake up tomorrow being short. But this film only gives us the Chanel to be sporadically. In those brief spurts when she is expressing her ideas of style, either in word or in actual dress, the film perks up and is exciting. The rest of the film reflects the French obsession about who is or is not going to bed with home, and it is all too dreary to describe. That Chanel was the long-time mistress of a boring man makes for a long time boring movie. Perversely, in the last few minutes we see the fully-formed Coco Chanel supervising an exciting fashion show, as if the filmmakers were saying, "Look we could have made an engaging, stimulating movie. But we are French and we do not do that sort of thing. We would rather have people sitting around being boring."

Perhaps the idea was that, as Chanel introduced the uncorseted woman, the woman without the strictly confined shape in favor of a looser, more shapeless design, they decided to make a shapeless movie.

The other annoying part of the movie is that for the first ten minutes there was scarcely any establishing, master shot. It is all in either medium close or close-up, as if they were expecting that no one would see this in the theater, and they just might as well shoot it for TV. I found myself physically moving my head from side to side looking at the screen, just trying to figure out what was going on. I have no idea of what the purpose of that was.
Posted by Lockhart at 9:01 AM