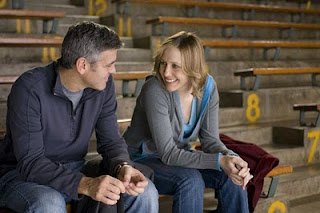 Jason Reitman's films have characters who think they know what they think and are unafraid to tell you, often near the start of the film: Up In The Air (2009) is no exception. George Clooney's Ryan Bingham has a monologue (it is part of a motivational speech) which is going to tell you all about who he is and what he is about. We are breaking Conventional Cinema Rule #37--telling when we should be showing.

But fact is, we like words, especially smart, funny words and there is nothing inherently uncinematic words. The great American masters, Ford, Hawks and Hitchcock (and that IS the official triumvirate these days) all were happy to let their characters talk, even for a long time. Sometimes the talk was the point and sometimes it was beside the point, but it was OK.

But no matter what, pictures trump talk. Except that in Up In The Air, the pictures lie and the talk tells the truth. I usually don't care about spoilers, but let me be a little careful here, as the film is still in the theaters as I write this. Pay more attention to what people say than the happy faces you see, especially in the very charming wedding montage. Don't trust those pictures--they're going for your emotions, and you're going to get hurt. The words--they are the real deal.

I see the DGA has named Reitman this year, and there is no better deserved nomination (although I suspect James Cameron will win every award in sight for Avatar--it looks like so much hard work.) But while they're handing out awards, please let them not forget this film's editor, Dana Glauberman, who cut Mr. Reitman's previous films. There is a cut toward the end of them film from George Clooney's face when he learns a colleague and friend has left, to the sight of that person moving away from us on an airport conveyor and back to Clooney's face which is as stunning as anything I've seen since Eisenstein.

Hey, and isn't it great that Zach Galafianakis is such a big star, he gets top-of-the-film billing for a one-scene cameo?
Posted by Lockhart at 3:03 PM