A dream come true you can believe in 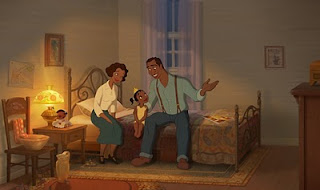 Disney stories push the ideas of wishing and dreaming very hard. "A Dream Is A Wish Your Heart Makes" Cinderella tells us. As the parent of young children I was always worried by the implicit passivity of that philosophy.

Imagine my delight to see a new Disney princess who has a dream, not based in fantasy, but a solid realizable dream--opening a fine restaurant--a dream that connects her with her family, specifically her father, especially after his wartime death; and who takes palpable steps and undergoes sacrifice and hardship to try and realize that dream. Never mind the color of her skin, progressive as that development may be--her active participation in her dream makes her the 21st Century Disney Princess we need.

Yadda, yadda, yadda. This is a spectacularly entertaining film. Disney's return to cell animation reminds us that 2D characters can be both more exaggerated and more convincing realistic than the squishy (if sometimes hairy) rubbery ball-characters we see in 3D animation. There is one virtuoso slapstick sequence that reduced the little girls behind me to hysterics, while I was in tears.

I was already in tears, not for sadness, but because Randy Newman's music is so much literally toe-tapping fun. A student of mine described the music as "real Disney" and so it is, filled with joy and wonder and imagination and fun. It doesn't hurt to have superb jazz, cajun and zydeco musicians on the soundtrack, including the glorious Terence Blanchard on solo trumpet.

The Disney legacy in animation begins with Steamboat Willie, which is not only the first publicly exhibited animation with synchronized sound, but the first to demonstrate how critical music would be to the creation and joy of animated cartoons. Disney artists (meaning directors, writers, animators, all creative personnel) seem to have recognized how central music is to that story-telling experience. That's not because "it's great for kids." Drama, which is story-telling by a group (rather than an individual) literally grows from dance and singing; from the 'orkestra', the place for dancing, by the 'choros', the people who provide background and comment on the story. Music thus, is never incidental to drama, but is the parent stem; a parent who likes to come and visit, and, as in The Princess and the Frog (2009), bring some good times.