A different kind of classicism 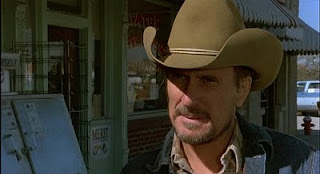 I expect that with talk of an Oscar nomination for Jeff Bridges' performance as a down-on-his-luck country singer in Crazy Heart, people will start taking another look at Tender Mercies (1983) for which Robert Duvall won an Oscar for playing a down-on-his-luck country singer. Frankly, I avoided the film on initial release because, while screenwriter Horton Foote (who also won an Oscar for this film) was often brilliant at dramatizing other writer's works (To Kill A Mockingbird being only the most notable example), his own pieces tend to meander and lack dramatic tension.
True to form, Tender Mercies almost completely dispenses with tension, with conflict, with three-act structure, with all the things that critics say Classical Hollywood (the "golden age" from 1920-1960) relied on, and which is usually insisted on by modern film development executives. We have to identify with the hero, and we have to get him in jeopardy by page 37, and we have to have a turnaround here and a this and a that. Tender Mercies is a simple tale of redemption; a redemption rooted in forgiveness freely and openly given. The structure is that of short scenes strung together as if on a clothes line; no inexorable movement toward an inevitable climax. Sort of like life. Could go this way, could go that way. Yet the film moves quickly enough, eliding the obvious points (the wedding which is the turning point for the main character is completely omitted) that it holds interest every single moment. But there is another way to define classicism, and that is the concealment of artifice, the concealment of art. And here the film is elegantly classical. Neither Foote nor director Bruce Beresford ever tip their hand at what they are up to. Turnarounds, good or bad, come without preparation, just like in life. People cope with them as best they can, usually by putting their head down and keeping going, just like in life. And Robert Duvall's performance echoes this reticence. One of his most important scenes is played with his back to the camera, looking out a window. And his longest speech, in which he admits--without a trace of melodrama--that he does not trust happiness, is rendered in a long shot embracing him, his wife and the garden in which he appears to be hoeing lettuce. It looks almost as though the film was afraid to invade the character's privacy. Despite its unorthodox structure, there is a balance and simplicity to Tender Mercies which can only be called classical.
Posted by Lockhart at 10:40 AM