Life is too short...

...to finish watching an atrocious piece of claptrap such as Redacted (2007). Since the beginning of his career, Brian DePalma has shown himself to be a third-rate imitative talen 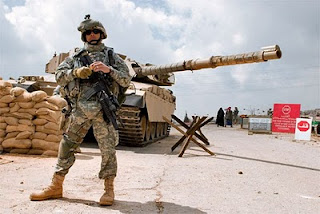 t. Now, not content with copying his betters, mostly Hitchcock, he has now begin to copy himself.

Let's be clear. I'm not unresponsive to the underlying thesis of the film, that the US confrontation with Fundamentalist Islamic terrorism has been bungled and that the war in Iraq was an inept, cruel and destructive sideshow. But the plot DePalma has seized on to illustrate the point seems (loosely based as it is on a real event) to have been cribbed from DePalma's own Casualties of War.

But that is not the real problem of Redacted (after all, Shakespeare stole all his stories), nor is it the fact that at nearly one hour into the film the issue of redacted documents had still not made an appearance. The fundamental atrocity of this film is not the repulsive act at the center of the narrative but DePalma's complete misunderstanding and incompetence in the use of alternate media in storytelling.

By alternate media I mean simulated homevideo, security cameras, simulated interviews and other purported "real" documents. These are uniformly produced with an ineptitude that is stunning. The shots are well-lit, the sound is balanced and clear. The actors take turns like a well-directed evening in the theater. Let's leave aside the fact that the actors are completely amateurish and unconvincing--not one bit of this supposedly "real" footage looks like anything other than a staged conventional commercial film.

So I did what I rarely do--I stopped watching. Now, I will sit through a lot. I made it through the original and the remake of Solaris--talk about a snoozefest! But I couldn't stomach the horrendous quality of the film. Make no mistake--it's not the repellant subject that turned me off this film. On the advice of friends, I sat through Saw. I think Paul Verhoeven is a talented director, though many of his films are disgusting in concept and execution. (He was recently reported to be preparing a film asserting that Jesus of Nazareth was the son of a Roman rapist.) But the double-whammy of bad taste and DePalma's incompetence combined to make this film not worth my time. I'm 54 now and with only 25 or so years left, I can't waste my time with Brian DePalma.