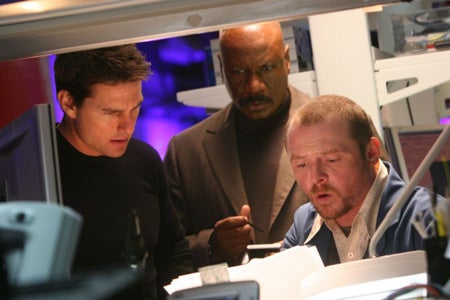 The first two feature film iterations of Mission Impossible were pointless because they discarded the central premise of the TV series--a team of specialists with complementary skills coming together to pull off an insane mission. In virtually the first sequence of the first feature, they killed off the team. This is like buying the rights to Mr. Ed and then saying, "First thing, the talking horse has got to go." Typical. Because just the concept of Tom Cruise in all his Tom Cruiseness is supposed to be enough.

Actually, if the series had been even cooler than it was, the team would have been different every week. Maybe they should have had, like, 12 agents and a different set of 5 or 6 on each show, and none of them really know each other that well. That would have been really cool. But in any case, in the movies, the entire Impossible Mission Force was a guy. I guess in that universe, the Secret Service would be one dalmatian.

Since those first two MI films were so terrible, I skipped the third, but came back to it when I learned that J.J. Abrams got the Star Trek reboot job by doing such a great reboot on Mission Impossible III (2006). (Incidentally, both shows were created at Desilu--before it was bought out by Paramount--and personally approved by Lucille Ball. I wish she had demanded a guest shot for herself on both of them. Maybe JJ should do an I Love Lucy reboot next. With explosions.)

I suppose any Tom Cruise film is inherently lame at this point, but they did restore the idea of a team, even if in a rather attenuated form. And it is always good to see Ving Rhames and Simon Pegg. Which makes me think--when are they going to make an A Team feature? [Update: I am advised by my loyal reader that an A-Team movie is being released June 11, 2010. It will star the powerfully boring Bradley Cooper and Liam Neeson, who is best when he is very nice, like in Schindler's List. So this looks like a nice, boring A-Team.]

Alright, alright, I'm avoiding writing about the movie. It was loud and fast and had lots of explosions and was ridiculous and fun and had Phillip Seymour Hoffman who plays good guys and bad guys in exactly the same sweaty way. Could they team him up with Paul Giamatti as uber bad guys? And have them both working for Kevin Spacey? Who works for Christopher Walken? That would be a movie.

I mean this movie begins and ends with Tom Cruise having a bomb stuck up his nose. Monty Python shoved a tape recorder up a man's nose back in the late 60s and we thought that was pretty funny. Tom Cruise has a nuclear bomb up his nose. Is there any point in seriously discussing cinema here?

I take back the thing about a Tom Cruise movie being inherently lame. That is not true if Tom Cruise plays an overweight bearded loud obnoxious Jewish talent agent. Now, that's a movie.
Posted by Lockhart at 9:54 PM