It's only funny when it's a real old lady 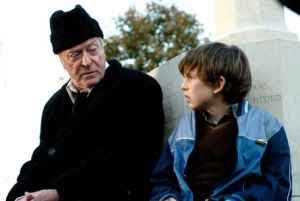 Is Anybody There? (2008) is the latest entry in the eccentric-but-innocent-kid-befriends-crusty-but-loveable-old-codger genre which I remember beginning with The Two of Us (1968) but which has its roots back at least as far as Silas Marner (that's a book, boys and girls).

Michael Caine, who plays a demented and dying low-rent magician has even been around this track before, most notably with Secondhand Lions. But one should never pass up the opportunity to see Michael Caine, who, in a single regretful glance, offers an entire seminar in motion picture acting. It's possible that he is the best that ever's been. Maybe it just helps to have tired, puffy eyes.

In the early days of Technicolor, cinematographers marveled at the quality of color in British films--so much less stark and obvious, more diffused and subtle. Turns out it wasn't the cameramen, it was the fog. Mist is so pervasive in England that the cameras pick it up everywhere. It doesn't look like they had one good day when they shot this film, and it suits the picture straight down to the ground.

The novel element in this piece is that, whereas death hovers in the wings throughout this genre, Is Anybody There? puts it front and center, not because of the old man but because of the boy, who has grown up in a private nursing home and is death-obsessed. Probably no American film could look death so squarely in the eye and without sentiment, but for the quick appearance of a badger toward the end. (This will be clear to anyone who has seen the film.) No weepy Mitch Albom moments here. This is a film for those who would go down giving the Reaper the finger.

As Groucho said, "An amateur thinks it's funny to dress up a guy as an old lady, put him in a wheelchair and push it down a hill. A professional knows it's only funny when it's a real old lady."
Posted by Lockhart at 9:14 AM