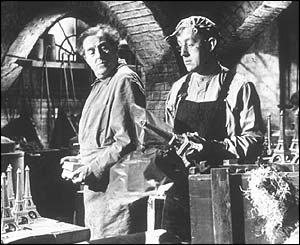 Looked at The Lavender Hill Mob (1951) for the first time in a number of years, and was surprised to note how very simple it is, and how subdued its comedy of eccentricity--a peculiarly English strain of the comedy of manners--is played.

Lavender Hill comes about halfway through the famous run of comedies out of Ealing Studios in the late 40s through the mid 50s, and features its house star, Alec Guiness. (Peter Sellers's early movie career could almost be seen as a send-up of this phase of Guiness's career, before he starting appearing in the great gaseous David Lean epics of the 50s and 60s. He is paired with the great Falstaff manque of the era, Stanley Holloway, who is enjoyable, but seems to be under wraps, adopting a respectability suitable to lesser clowns.

Memory bestows greater complexities and more slapstick farce on the films than they actually possess. They used to seem so zany. The most unconventional aspect of the film is the easy social mix between the working middle class (bank clerk and souvenir merchant) and the rather mild British criminal class (some charming smash-and-grabbers). To the original audience, the idea of a casual working friendship with a second-story man was both incongruous and democratically liberating.

Usually in a heist picture (and this is certainly a "proto-heist" comedy), one enjoys seeing how the plan is laid out, and then seeing how the perpetrators will cope with the inevitable mishaps. The only mishaps are a brief chase through a Scotland Yard museum exhibit, and a mix-up with the souvenir Eiffel Towers. The climax of that sequence is a delirious scamper down the steps of the real Tour Eiffel, effected by some not-bad-for-their-time process shots. What is remarkable about the scene is how panic and desperation slip into giddy delirium as they run faster and more carelessly down the stairs. It is only at that moment that our loveable villains exhibit real uninhibited joy and delight in the results of their criminal activies.

There is also a very amusing sequence of Guiness and Stanley Holloway desperately trying to board the Channel ferry back to England and running into every kind of French bureaucratic delay--capped with the little man who is looking for exactly the right rubber stamp to stamp the proper forms. And the final wrap-up gag forms a frame for the entire story. Still, the film seems slighter than it was as remembered, and it is hard to imagine this film inspiring the affection its 1951 audiences had for it. Nonetheless, I shudder at the prospect, or should I say, threat of a remake scheduled for release next year. Yes, Lavender Hill could be improved, but you will forgive me for being skeptical that it will be.
Posted by Lockhart at 6:30 PM