Couldn't help it, I laughed 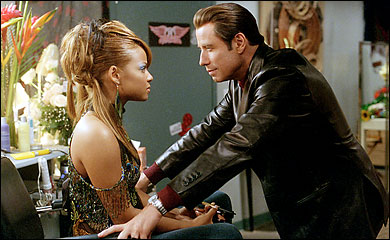 You can read all over the InterWebs how Be Cool (2005) is a terrible movie, an unworthy sequel to Get Shorty, fails to capture the spirit of Elmore Leonard and is completely unfunny. My brain is obviously stupid, because it told me to laugh when there was funny stuff in the movie and there was whole bunches of funny stuff.

Be Cool lacks the deadpan black humor of its predecessor. It is much jokier, even beginning the film by kidding its own existence (Chili makes some very disparaging remarks about movie sequels) and Vince Vaughn and Andre Benjamin are permitted to run riot through their scenes, spritzing more comic ideas than the film has time to handle. Director F. Gary Gray doesn't have an enormous amount of comedy on his resume, but his background in slick crime film such as Italian Job seems to have been useful. Further, he seems to have had the sense to leave the comedy to the professionals, and to keep things moving and give the story a little heart.

The heart comes from a performer named Christina Millian, who plays the discovery everyone is fighting over and who should have become a star from this film. She seems very much worth caring about, and Chili's solicitude for her seems completely plausible.

I felt a personal connection to the whole topic of criminal methods to enforce collection in the music industry, because from my experience in that business between 1981 and 1988, there were a lot of criminals involved and many of their methods were criminal. The law firm I was working for had a number of artists who had begun their careers on a label widely known to be mobbed up (that catalog now belongs to a mega-corporation). They seemed to have a lot of people in Accounts Receivable who could crack their knuckles and who possessed a lot of detailed information about kneecaps. At least more than they had information about music.

Dwayne Johnson--then still calling himself "The Rock"--has to be commended for his comedy chops and his courage in playing a flamboyantly effeminate gay character without camp or condescension, but just a kind of dim incomprehension that is normal for most actors who have no idea what image they project.

And film history will note the happy reunion of John Travolta and Uma Thurman on the dance floor 10 years after Kill Bill Volume 1. That alone is worth the price of admission.
Posted by Lockhart at 9:11 AM