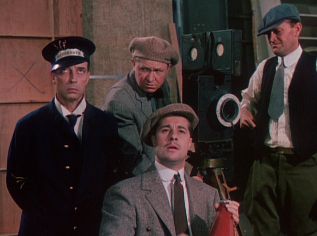 Hollywood Cavalcade (1939) starts out so well-intentioned, it is easy to forgive a lot of its conflations, misstatements and mythologizing. You gotta like a film that doesn't just concoct a story about the invention of throwing pies in slapstick comedies, but actually delves into the question as to what are the best types of pies to throw.

1939 marks the beginning of self-consciousness for Hollywood. The talkies had been in place for 10 or 11 years and it was becoming apparent that the pioneers of the first decades of film were at or near retirement age, and that it was time to memorialize film history. Hollywood, like John Ford, has always believed "when the legend becomes fact, print the legend." So a story was concocted for Don Ameche to play a pioneering filmmaker who begins as Mack Sennett and transmogrifies Cecil B. DeMille, two figures who, together embrace much of American silent film history. (Alice Faye is the heroine, but given that they took away her one and only song for the movie, she hardly makes a mark in the film, except as a darn good sport with all those pies and all that mud.)

It is of course, marvelous, for a slapstick buff to see not only Buster (still relatively young and fit) but Chester Conklin, Hank Mann, Snub Pollard and Ben Turpin in Glorious Technicolor. For that one is willing to accept some gross, but probably not important, inaccuracies. It bunches all of these fellows (including) Buster into a proto-Keystone Kops group. (Few of them were in the Kops, and Buster never worked for Sennett and never threw pies at all in his movies.) Buster does re-create the motorcycle stunt from Sherlock, Jr. with the very game Alice Faye. There's even a brief doff of the hat to Fatty Arbuckle, as a rotund actor is seen from behind walking through the lot and is greeted by a stagehand, "Hi, Roscoe."

Later, the Don Ameche character starts to get into biblical epics and the romantic complications with Alice Faye take center stage, and those have the same effect on me now as they did when I was 10 or 11--get rid of the mushy stuff and back to the slapstick!

Oddly, though few of the "facts" about film history in this film are correct, the spirit is right, not to mention, recreation of silent film stages and production procedures. Unfortunately, some of the clips were used over the years as authentic examples of silent film, but Hollywood Cavalcade can't be blamed for that. The participation of so many who were there makes it a valuable historic resource for the look and feel the silent era. The Buster Keaton Story, produced 19 years later, should only have had that level of authenticity.

There's nothing wrong with film that couldn't be cured with more Buster Keaton. (Wouldn't you love to see Buster's version of Inception?)
Posted by Lockhart at 5:08 PM