Just waiting for that kitchen sink to show up 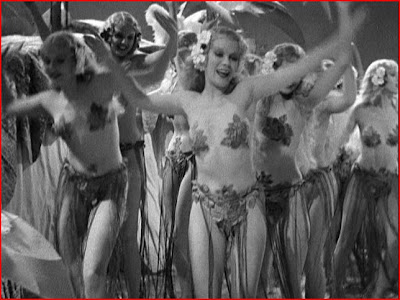 Murder at the Vanities (1934) is the kind of film that only a producer could concoct. It's part whodunnit, part hokum comedy (with Jack Oakie and Victor MacLaglen competing to be Biggest Hambone of 1934), part musical (featuring Kitty Carlisle, just a year before climbing aboard with the Marx Brothers) and part skin show.

The picture takes its title, setting and aesthetic inspiration from one of the sleaziest showmen in theatrical history, Earl Carroll, creator of Earl Carroll's Vanities, a review like the Ziegfeld Follies or the Shubert Passing Show, which appeared in new editions on an annual or near-annual basis in the 1920s and 30s. Carroll was as close as one could get to smut peddler within mainstream entertainment of the early 20th century. His mob connections got him a jail term when he perjured himself to protect some bootlegger buddies, which added to his notoriety. He was also a well-known cheapskate.

Murder at the Vanities partakes of Carroll's spirit, tossing together a wild variety of entertainment, plenty of girls, not much money spent on either top-tier talent or underwear for the women. The film has become notorious on the YouTubes because of a song called "Sweet Marijuana;" there are also a couple of numbers from the Duke Ellington Orchestra, still in its first generation, and yet to experience the Swing Boom that Benny Goodman kicked off in 1935. Ellington still swings hard, especially in something called "The Rape of the Rhapsody," which would an example of surrealism in music, if such a thing existed.

Clearly, the producers didn't care much about the mystery. The police can't be bothered stopping the show, even with a murder backstage, and the investigation seems to be conducted by having the producer (Oakie) and the cop (McLaglen) alternately yell at each other and ogle girls. Meanwhile, characters run around on stage with both fake and real guns, without any intervention by the authorities. What could this show have looked like to its audience?

On top of all this, some German guy debuts the song "Cocktails for Two," soon to fall victim to Spike Jones, and Kitty Carlisle sings, referring to the Earl Carroll girls, "Where Do They Come From and Where Do They Go?"

Nobody has an answer for that one.