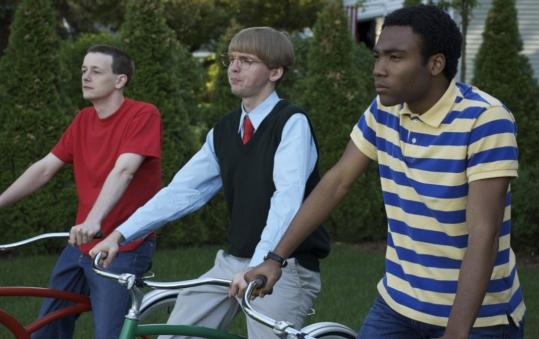 Mystery Team (2009) shouldn't work at all, or if it did, it shouldn't be an actual movie. The creators, Derrick Comedy, are a sketch comedy group from NYU most famous for their online videos (click the picture). Their many predecessors, including National Lampoon, Saturday Night Live, Kentucky Fried Theatre, The Proposition, Ace Trucking Companyh, Broken Lizard and Kids In The Hall have rarely, if ever, produced films worthy of the name. Even the great Pythons only made two actual films, Holy Grail and Life of Brian. We will not discuss the fairly dismal track record of films made up solely of unrelated sketches--they are best watched in chopped-up bits on YouTube.

And the premise of Mystery Team (Encyclopedia Brown grows up and interacts with the real world) should not have been able to play longer than ten minutes. The fact that Derrick has created a three-act story with real development and rounded characters suggests that this team may have a real future in film, both together and separately.

On the other hand, we have had a parade of preposterous child-men in movies for the last 30 years ago, including Pee-Wee, Steve Martin in The Jerk, Tom Hanks in Big (and all the other body-switch movies of that year), and nearly all the Farrelly brothers characters. Going farther back, there are such inexplicable characters as Harry Langdon, Stan Laurel, Lou Costello and Jerry Lewis. The first two were even sometimes married in their films--which boggles the mind. So Derrick's concept is not utterly unprecedented. What is difficult about their characters is a certain monomania and a resistance to growth and change. When a character like this matures, the story is over (which is, indeed, the resolution, of Mystery Team).

One thing that makes the film successful is that it takes its own story seriously, resisting the temptation to drift into parody or burlesque, or to point up the story's natural ironies in an obvious way. The camera keeps its distance in order to let the players interact and tell the story, and never strives to make them more ridiculous than they are by definition. The result is that both the film and the characters have an absurd dignity and integrity. It is as if the film were directed by Oliver Hardy, who was always doubly funny to me, because he thought believed that while his buddy Stan was a fool, he himself was a perfectly sensible person, despite being a bigger fool than Stan.

Nor does the film attack the innocence of its central characters, despite putting them in extremely raunchy and tasteless hard-R situations. Their obliviousness shields them from our distaste, and they become almost more charming for being so pure. There's something sort-of noble, literally Quxiotic, in reaching into a backed-up toilet to retrieve a worthless trinket merely in order to make a child happy. Or the comparison of indefatigable lap dancers to some annoying pigeons. That mixture of disgusted admiration keeps the film afloat for much of its running time.

[Incidentally, this film will live forever in my own family's hall of fame if only for the scene in which the Mystery Team attempts to crash a "gentleman's club" by impersonating their juvenile concept of gentlemen--complete with construction-paper top hats, monocles, muttering, "harrumph", "top hat" and (best of all) "England." Priceless.]