Victim of the System 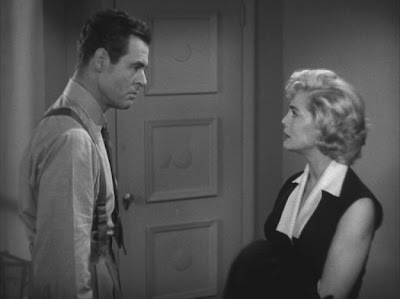 No, I'm not referring to the protagonist of The Racket (1951), whoever that might be. The film itself is the victim of a studio system which felt compelled to adhere to standardized story tropes and conventions. In this case, a crime film has good guys who catch the bad guys and bring them to justice. That's just the kind of thinking that's going to keep you from making an interesting film, and in hindsight, going to prevent you from creating a decent film noir, no matter how hard Warner Home Video wants to believe The Racket is one.

Sure, we have the two kings of noir at RKO in the postwar years, der zwei Roberten,* Ryan and Mitchum, not to mention the noirest of noir actresses, Lizabeth Scott. But there is no fatalistic outlook, no dark world of shadows (and no Nick Musaraca, brilliant cinematographer to make those shadows), no ambiguous moral universe. The only thing interesting about the piece is that Ryan the gangster and Mitchum the cop are both middle management types straining against the restrictions placed on them by their superiors. Unfortunately, they never have the type of encounter that would have developed their areas of commonality.

In fact they barely play together at all, which is a shame -- Ryan's tightly wound tough guy against Mitchum's laconic-to-the-point-of-sleepy cop. Or better yet, see the roles reversed. Ryan seems a lot more angry about not being allowed to beat people up than Mitchum is that he can't arrest them. In fact, Mitchum is scarcely believable as a cop at all, which is probably why they never show him in any kind of uniform, and his suit looks like he's getting ready go drinking rather than testify to the grand jury.

If only RKO (which put this movie through five different directors in its long labored production history) had stopped worrying about who did what and who should go to jail and just brought Mitchum and Ryan together, perhaps in a situation in which they were dependent on each other and got to see each other's humanity instead of just trading insults, maybe then there would have been a noir, or even a movie. Even Lizabeth Scott can't light it up. This is a case where mere professional competence isn't enough.
_____________
* Yes, I know that's cod-German
Posted by Lockhart at 6:17 PM