Gilligan's Dilemma, or why all the clam diggers? 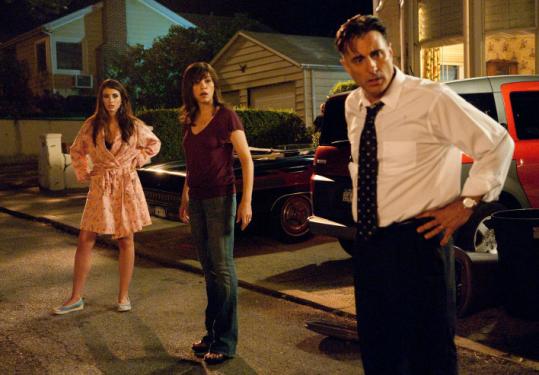 A couple of contemporary films investigate the comfort, security and smothering quality of living one's life in anchored to one spot. (Both also involve clam digging communities in the greater New York area.) City Island (2009) is so tightly limited, it would easily fit on an off-Broadway stage. (No, it's not that it's stuck in one room, but that the passions of the characters would be right at home in the theater.) As in many a farce, every character has a secret, a secret that puts them in conflict with the small-town ethos of City Island, New York. Dreams of being an actor, of smoking, stripping and considering infidelity are all deeply suppressed until they explode in a theatrical-style all-out confrontation, illustrated above.

The film has proven an audience hit, and deservedly so, especially for a strangely charming scene in which prison guard Andy Garcia auditions for a Martin Scorsese film by improvising a scene he might have witnessed at work. Maybe it's because we would love to think films succeed by the intrusion of little shards of reality. (A doubtful prospect.) The odd thing is that the film starts off by setting out a great deal of detail about the uniqueness of the setting and the proceeds to ignore those specific unique qualities in favor of treating it as any isolated small-town-type community. The people seem more quirky than the setting, what there is of it. What I'm trying to say is it's hard to say whether this family is meant to be eccentrics or typical of City Island, since all we know about it is that they fish and that some are born City Islanders and others have City Islander-ness thrust upon them.

So it's odd that this film is far more effective than the similarly-themed Diggers (2007), even though the latter film has embedded the characteristics of its setting into the character's DNA. Insularity, "us against them" mentality, "this is the way it's always been" thinking--these are built into the story and situations in Diggers, whereas City Island's characters seem to have had their quirks appliqued onto them after the fact. Nonetheless, or perhaps, because of that, City Island moves along in a purposeful manner, whereas there are dozens of scenes in which seem to lack any point or purpose in the film. They don't provide new information on characters, move the story forward or develop what little theme there is. Diggers seems to have been designed as an acting fest for the pals of writer-actor Ken Marino (late of The State), including Paul Rudd, Maura Tierney, Marino, Sarah Paulson (uncharacteristically as a put-upon mom), Ken Marino and Lauren Ambrose.

As if aping the lives of the characters, the movie ambles around in various brackish backwaters, not headed anywhere and therefore not arriving anywhere. I do have to say they have meticulously recreated the wardrobes of the mid-70s, my college days, which were probably the low point in style for the entire 20th century. It was as if Watergate had so demoralized all of us that we figured, "what the hell, we'll just wear cheap ugly crap until we cheer up."