I don't have much to the add to the thousands of barrels of pixels which have been and will doubtless continue to be spilled about Harry Potter and the Deathly Hallows Part 1 (2010), so I will limit myself to a few probably very non-unique observations. (The rule of the blog is to write about every film I see.)

When I lived in Scotland in the mid-late 1970s, it was widely deplored that it was too difficult to make a feature film in the beautiful Scottish countryside because (a) the sky was often too dark for good images on a full-size screen and (b) the weather changed so rapidly that over the course of a shooting day it would be too hard to make shots within a single scene or sequence to match. It is my understanding that good chunks of HP7 was shot in Scotland, and those sequences too justice to the gloomy grandeur of the landscape. The problem is that so much digital manipulation is possible in post-production, it is impossible to know if the palette of green-grays that dominate the film are natural or man-made. Nonetheless, one must note that this is the greyest Harry Potter film made, which makes sense as Harry and friends have left Hogwarts to find and destroy the horcruxes (magic thingies that have to be destroyed--that's all you need to know).

This is the first of the series to penetrate Central London to any extent, and I am sorry the sequence is as short as it is. I can imagine all sorts of zany hijinks with Ron Weasley being introduced to the Muggles world, but the film doesn't have much time or space for comedy.

I understand that the film could not be expected to recap the previous films -- who would think of watching a film with "7" in the title without seeing the previous installments? -- but it would have been good to review the bidding and remind the audience what the stakes are, i.e. what exactly will happen if Voldemort succeeds. (I'm pretty sure things would be...bad.)

One of the benefits of splitting the book's story into two films is that there is time for scenes, for acting, for the characters to react to the events, rather than rushing from one situation to another. One of the appeals of the book series is that it is packed. Packed with incident, packed with details of this invented world and connections between the people and the incidents found there. Each book was at least a 7-layer cake of invention, which is rare in any kind of literature today, which so often feels attenuated, where the Potter series is robust.

The challenge for a filmmaker is to get all that story and texture in without making the film feel cramped. By spreading the story over five hours and two films, there is more air in the events, and for the first time (for me) I got the sense that Daniel Radcliffe and Emma Watson in particular could actually act and not just speak lines with conviction, which is the reasonable minimum for childhood actors. And sending the characters across a barren landscape put them in a cinematic environment akin to that of a Western, a sci-fi film or a samurai film; those movie environments in which the characters must create or re-create society where there is none.

What I'm trying to say, I suppose, is that, even though it feels lighter on the special effects than previous installments, HP7 feels more like a "movie-movie" than its predecessors. It's a welcome respite, as grim and dark as it is, before what is undoubtedly going to be a loud, operatic and effect-ridden finale this summer.

Central to the peculiar charm of the series, both book and film, is Harry Potter's reluctance and diffidence to the role of hero which history has thrust upon him. From the moment the he re-entered the wizarding world he was celebrated and feted -- which must have felt good -- for something he had done involuntarily -- not so good -- and for what he is bound to do in the future -- total bummer. To be made the future savior of your race is to live under the shadow of potential failure and disappointment your whole life. 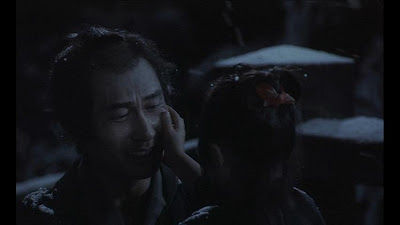 That whole conundrum is neatly side-stepped by the hero (and I use the word advisedly) of When The Last Sword is Drawn (2003) a deliciously existential samurai epic which was inadequately distributed in this country, but which I urge you to seek out.

I must plead a shocking ignorance of the samurai genre, other than classics such as Seven Samurai and Yojimbo (both remade as American Westerns). Both are directed by Kurosawa, who was criticized in Japan for being too Western in approach. Reversing the situation, it would be possible to develop an appreciation for the Western by seeing only Stagecoach and The Searchers, but one could not claim to be knowledgeable about the form, nor could one understand a great deal of the context. Genre gains both depth and texture by the accumulation of the prior examples of the genre. And great genres develop sub-genres within themselves, e.g., Westerns can be "sheriff cleaning up the town", "farmers vs. cattlemen", "cattle drive", "Indian fighting" and "good-bad man", "US Cavalry" and many many other variations. A film about recent Civil War veterans is going to be vastly different from, say a "closing of the west" film set at the turn of the 20th century, a generation and a half later. The same is evidently true of samurai films. Last Sword is an example of the Shinsengumi genre, about the samurai organized to defend the Shogun against the Emperor at the close of the Edo period.

But, although it is helpful to have some historical context, which one can pick up from a site such as Asian Media Wiki, like films of other genres, one can enjoy Lost Sword as pure film. And the pleasures are many and varied. There is some wonderful samurai action, both individual and in massed battle, and one of the most stunning special effects I've ever seen in the execution scene near the beginning of the film. There is a wonderful sense of design and color one would expect from a film which is an expression of Japanese culture. There are amusing and complex acting performances. But most of all there is the near-Brechtian character of Yoshimura, played brilliantly by Kiichi Nakai, an actor whose work I am going to seek out.

Yoshimura is like a talented Mother Courage, although possessed of a sense of honor which would be foreign to any Brecht character. Nonetheless, he has built his own value system parallel to that of the society around him, one in which loyalty to wife and children trumps that of the clan and the samurai code. Perversely, both values are extremely Japanese. An older Korean gentleman who was fluent in English, Korean, Chinese and Japanese (he was of the generation in which all those languages were required of students) told me that he preferred to write and speak of family relationships in Japanese, because it had the greatest complexity and subtlety in that area.

Much to the consternation of the warrior culture of which he is part, Yoshimura puts his first priority on the survival of his family, and it makes him very modern, very Western and very Japaneses all at once. In Nakai's performance, Yoshimura is one of the most relatable figures in any Asian film, let alone a samurai film. He is like the early James Stewart, likely to be underestimated because he is humble, self-effacing and almost shy in comparison with the proud men around him, notwithstanding the fact that he may be the best swordsmen of them all.

Accordingly, with all the action and spectacle of the film, the highlight for me is pictured above, when Yoshimura has what turns out to be his final parting with his family, especially his tiny daughter, who bleats out "Papa" (in Japanese) as though she could have known what was happening to them. As a father, I can't be objective at all. Every parent knows the terror of the final parting with a child, and the existential terror of never knowing when that will be.

I know I haven't done much film analysis in this reflection. I'm afraid I found the film to affecting and emotional on first viewing to do so, but I do expect to revisit this movie, whether or not I write about it again.

The best thing is that you don't have to take my word for it. You can watch the entire film here. I envy you seeing it for the first time. (Allow 2-1/4 hours--it will be time well spent. Additional caveat -- there is some advertising.):