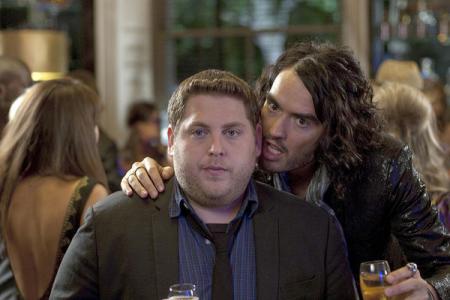 Bob and Ray, the endlessly prolific radio comedians had a short run of sketches called "Brush with Greatness" with sketches like a cabdriver in whose cab Heywood Hale Broun had once left a half-finished crossword. (If you don't know who Heywood Hale Broun was, the joke may be even funnier.) There is a small sub-genre of comedy about contact between celebrities and non-celebrities. The celebrity is often fictionalized, as in The Man Who Came To Dinner, Funny People and Notting Hill, but played by an actor who closely resembles the genuine article.

This is the template for Get Him To The Greek (2010), a sloppily assembled Xerox of My Favorite Year which is meant to combine low comedy, sentiment and character development, in the pattern of the Judd Apatow comedy factory. But Aldous Snow, the Russell Brand cannot be turned into a character we care about because rather than fashioning a life story and circumstances that might have shaped a real person, the filmmakers have attempted build a person entirely out of jokes. We are supposed to believe in his real affection, attachment and need for his girlfriend, but she is an incoherent imbecile engaged in casual unfaithfulnesses making it impossible to believe anyone would care for them. (The girlfriend is played with a surprising comic flair by Rose Byrne, best known for the melodramatic Damages.)

I suppose I find it hard to care for any character played by Jonah Hill, because he is played by Jonah Hill, a squat repulsive pustule apparently made of the residue left once Seth Rogen lost weight and started washing regularly. The idea that he would have Elisabeth Moss as a girlfriend borders on science fiction, but it least it moves toward developing sympathy for him. When at the end of the film, she accedes to an absurd suggestion by Russell Brand in order to get revenge on the unfaithful Jonah Hill, it is clear the filmmakers not only can't write and create real human beings, they may not actually know any.

Some of the things I was supposed to laugh at was sex on a toilet, vomit and inserting drugs in one's anus in the middle of an airport. Here's what I did laugh at - the appearance of the actor who plays Draco Malfoy looking just as annoyed at Jonah Hill as I felt, and the appearance of Paul Krugman in a Today Show segment (and what a gang of whores NBC has become since it has been owned by Universal). The latter encounter consists of vomit-stained Jonah Hill landing on a sofa and looking surprised to see Nobel laureate Paul Krugman sitting opposite him. "You're Paul Krugman," says Hill just as we were coming to the same realization. "Yes," says Paul Krugman, doubtless wondering what he was doing in this tribute to bodily functions. I don't know why, but that was comedy gold. 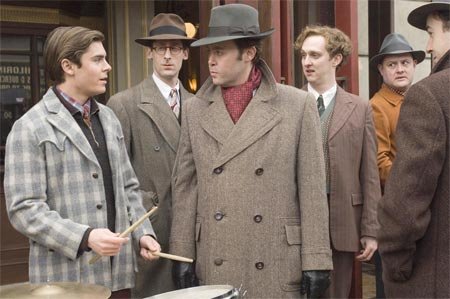 Far more rewarding, perhaps because the author did not have to invent his main character is the woefully under-distributed Me and Orson Welles (2009). It does help that Richard Linklater, director of Dazed and Confused, Before Sunset, Waking Life and School of Rock, is a talented filmmaker, which Nicholas Stoller is not. Add to that the circumstances that the celebrity in question is real and the story is a more compelling coming-of-age story based on a young adult novel, and the results are bound to be better.

Welles is theater history nearly as much as he is film history, staging several seasons of classical repertoire, including a Voodoo Macbeth, a contemporary Julius Caesar, the original production of Richard Wright's Native Son and a failed Shakespeare epic Five Kings, comprised of the Richard (II, III) and Henry (IV, V & VI) plays.

The story takes a familiar pattern of a young man seeking to find his own place in the world while coming within the orbit of a very strong mentor and, as it turns out, frenemy. Zach Efron need only be reasonably intelligent and personable, and he does that just fine, and be attracted to Clare Danes, which seems pretty easy. But the sine qua non of a film like this is the actor playing Orson Welles, a role assayed in the past by (among others) Vincent D'Onofrio (Ed Wood), Angus McFayden (Cradle Will Rock), Liev Schreiber (RKO 281) and Orson Welles (The Man Who Came To Dinner, television 1972). British actor Christian McKay tops them all (including Welles). McKay vaguely resembles Welles physically, but he has the voice to the tee, as well as the brio, the arrogance, the smugness and the childish petulance of the young Welles.

Of course, Welles could get away with all this because he was brilliant, especially when he was under pressure. Realizing that, he seemed to spend his career contriving high-pressure circumstances for himself, even when otherwise unnecessary. In the film we see Welles's sharp, bold staging and playing of Julius Caesar, and a very pleasant bonus on the DVD is the inclusion of about 12 minutes of the play, most of which was unused in the final film, but is of historical curiosity and could be useful to people like me who frequently have to teach the play in school. The play also takes the trouble to identify and evoke many of Welles' collaborators, including the waspish John Houseman, the tightly wound George Couloris (the old banker in Citizen Kane), the easygoing Joseph Cotten and the ambitious Norman Lloyd (although in this case the physical casting is right, the actor conveys none of the sharp nasal projection of Lloyd, who had a long film career, most memorably as the headmaster in Dead Poets Society.) Most memorably Welles takes the brief throwaway scene of the mob engulfing Cinna the Poet and instead of cutting it, as most directors do and Welles thought of doing, building it up through staging and using contemporary stage and acting technique build it into one of the centerpieces of the play. (There's a very good textual argument for doing so, but there's not time or room to go into that now. Let us simply note that the tyranny and the fickleness of the mob is one of Shakespeare's major themes.)

The design of the film is spot-on, especially for a film which did almost no shooting in New York. Perhaps most impressive is the fakery that creates Bryant Park where there was none. I must confess I haven't a lot to say about Richard Linklater. He is a filmmaker with superb technique who does not impose a set style on his material, but as appropriate for such an eclectic artist, lets the content dictate the style. If there is something that unifies his work, it is the progress toward maturity, understanding and responsibility for one's own actions. This is well handled here by the independent character played by Zac Efron, who is temporarily seduced both by Welles and the Clare Danes character, but has enough sense of himself to avoid devastation when all the rugs are pulled out from him. Instead, he's grateful for the knowledge gained and ready to move on. And his penchant for long takes and camera movement not only serve story and setting (the theater, the ultimate long take), but of course complement Welles's own theater-based style. The film may not be great or moving or startling, but it is terrifically satisfying, and that's a rare quality these days.

And apropos of Welles's theater career, here is the only film we have of the Mercury's work in the theater, a 4-minute newsreel report on the 1936 Macbeth originally presented by the Negro Division of the Federal Theater Project at the Lafayette Theater at 131st Street and 7th Avenue: