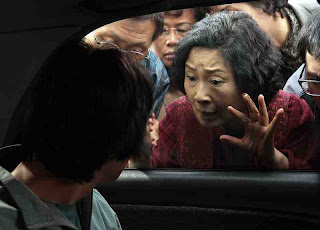 As most of our really clever crime dramas have escaped the big screen for the small, filmmakers from overseas have been rushing in to fill the gap. Time was when all foreign films seen here were art films, and entertainment stayed home, but that is no longer the case, given the huge void in diversion for intelligent adults found in the local Google-plex. Mother (2009) is a wonderful twisty exemplar from South Korea. Or at least it comes wrapped as one -- a crime procedural with the twist of a mother who must,against the odds and the opposition of the police, solve a crime to exonerate her beloved and mentally disabled son, who is charged with the crime. It could have been a Lifetime movie.

But what director Joon-ho Bong and his co-writer Eun-kyo Park have in mind is a black satire on the myth of ever-powerful Mother Love. At first, we are absorbed in the details of her investigation, and there are lovely details planted all the way through which pay off later in the manner of Hitchcock, e.g., the mother's acupuncture practice, the kind junkman, even the peculiar prologue in which the mother dances in a field in a rather non-motherly way, as if to start the entire film off with a wink at the audience.

We see the film at a disadvantage here, for the actress playing the mother, Kim Hye-ja is a well-known and beloved mother-type figure in South Korea. Think of your favorite TV mom, be it from Happy Days and Leave it to Beaver. Then imagine that actress treading the line between fierce and protective love, to obsession to, well, you really should see the film yourself. That almost imperceptible shift provides the wicked fun of Mother. Bong has been making monster films prior to this, and he doesn't seem to have stopped, abetted by the brilliant work of Kim.

Can't say why, but one of the strongest impressions I carry away from the film is what one finds under the characters' feet. The film travels up and down the class structure, from mother and son living at a survival level, to the abundance of a golf course, the anonymous sterility of a police station, to an abandoned hovel. The striations in Korean society seem to be defined by the difference between pavement, tatami mats, country club grass, police-office linoleum, the firm mud of a well-trodden path and the soft mud that marks an area where few trod. I can't think that's an accidental impression, for as one might expect of Asian film, the overall tone of the film is complete control in all its effects, which lends exhilaration to its final reveal.

I am going to be looking at more of Joon-ho Bong's films and writing about them here, that's for sure.
Posted by Lockhart at 3:53 PM