Your past is waiting for you in your future 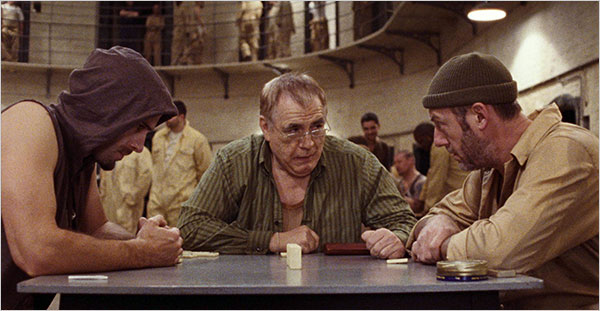 The Escapist (2008) may be the only prison break film which shares structural qualities with a romantic comedy, specifically (500) Days of Summer. That is, the beginning and the end of the story are deeply intertwined, and action and result seem to co-exist side by side.

It is hard to say what new could be done with a prison film, otherwise. It is a limited form, and for the first thirty years it would seem that virtually all of the story twists had been exercised. After that, prison break pictures were based on true stories as in Escape from Alcatraz and The Great Escape. Since then, pickings have been lean for the form, which has mostly upped the violence on-screen without any true developments in the genre.

Escapist has all the usual characters, the Brain, the Muscle, the Scrounger. It has the usual fake-outs and tricks. The only thing truly interesting is that the audience acquires the knowledge that the entire reason for the break is rendered moot even before it has begun, and that these yobbos are risking everything for nothing. The plot launches along three separate time lines and moves freely among them. Though disorienting at first, eventually it becomes revelatory, like a cubist picture in time.

Perversely, by rejecting the trappings of conventional suspense, director and co-writer Rupert Wyatt creates a riveting form of anti-suspense: not, "what will happen?" but "what will they do when they find out?" This structure drenches the entire story in irony, a tone natural to the prison break (which is usually feckless).

Plus there's Brian Cox. He seems to have experienced an Anthony Hopkins-type transfiguration, by which a yeoman actor becomes an acting deity. More power to him.
Posted by Lockhart at 1:20 PM