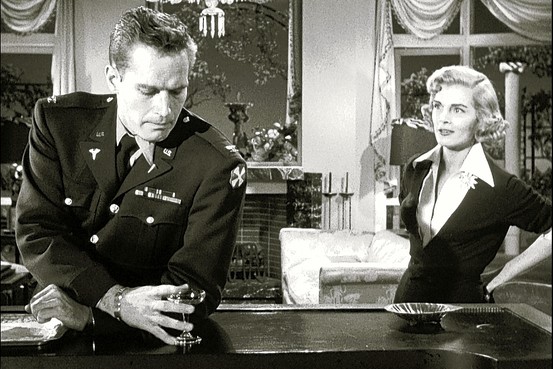 Film noir, once an interesting mode of film analysis, has become such a potent marketing tool that desperate home video distributors are willing to slap the name onto any black-and-white film that has any character or activity which is slightly more hard-hitting than a Shirley Temple film. In the case of Bad For Each Other (1953), not only is there no sense of doom, no guilt, no sense of the world overcoming the protagonist, there is not even a crime of any kind. Don't let the title fool you: there is really nothing to recommend this film for any purposes, especially entertainment, except for the presence of the borderline sinister Lizabeth Scott, who managed to project the aura of a girl who was born to a good family but promptly got into bad--maybe even kinky--stuff. That's all kept pretty well offstage in this attempt at a Warners-style soap opera, directed by Warners journeyman Irving Rapper. 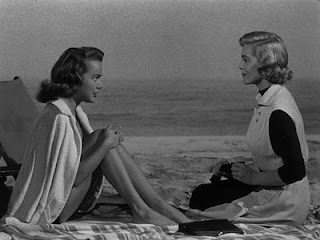 Two Of A Kind (1951) comes a bit closer to noir, given that there's a half-hearted attempt at a con, and that the head con is the weak-chinned and sort-of greasy Alexander Knox. (Yes, I know he's famous for playing Woodrow Wilson, but he was sort of a greasy prig himself, disguised as an upright college professor.) The con itself, like most long cons, has disappeared into the mists of time. Long cons require a fundamental lack of knowledge on the part of the mark, and it is hard to keep the marks in this state of extreme ignorance nowadays. Specifically, the cons try to pass off seedy, sweaty and burly Edmond O'Brien as the son they lost when he was a three-year old boy. (It's hard to imagine Edmond O'Brien was ever three years old. Could he have been that sweaty then?) The point is, one simple DNA test would end this con quick. As it is, they can't pull it off, even then sweaty Edmond has allowed the tip of his pinky to be hacked off to further the plot.

But honestly, the men are of no real interest in this movie, at least not in comparison with the good girl-bad girl dichotomy set up, as seen in the illustration above. The good girl is Terry Moore, who evidently learned from bad girl Lizabeth Scott, and switched over to being a bad girl later in the decade, especially in a sweater (very bad!).

But Lizabeth Scott is the whole show here. At first she seemed like a road company Lauren Bacall, all husky voice and sassy attitude. But where Bacall is insolent, Scott has the inherent superiority of just being better and smarter than her men, which makes her free to exhibit a sparkle and enthusiasm not available to the sullen sultry Bacall persona. Bacall had Howard Hawks to guide and shape her, but Scott had no such mentor. She had been discovered by producer Hal Wallis and followed him through Warners and Paramount, both home to heavy-breathing melodrama before she fetched up at Columbia, which really lacked a house style, taking what it could from the occasional A-list talent that went slumming in Gower Gulch. But Wallis was not a star-maker, but a star-finder and exploiter. Among his contractees were Kirk Douglas, Shirley MacLaine, Elvis Presley and Martin and Lewis. The filmographies of the latter stars should indicate that Hal Wallis mostly gave up on quality when he left Warners.

Oddly, though Bacall was a cool and a noir dame, she was never a femme fatale. She might think you were kind of a jerk, but she would never destroy you. Scott, on the other hand, might be completely head-over-heels about you, but she'd sell you out in a second. That splendid balance of enthusiasm about men and about money made a lot of her films and roles seem more interesting than they really were.

And you gotta like a gal whose big break in show business was understudying and appearing as Sabina in The Skin Of Our Teeth. It is said that at 81 she could still recite her first speech in the play from memory. I believe it. It's a really good speech.*
_____________________________
* Oh, oh, oh! Six o’clock and the master not home yet. Pray God nothing serious has happened to him crossing the Hudson River. If anything happened to him, we would certainly be inconsolable and have to move into a less desirable district.

The fact is I don’t know what’ll become of us. Here it is the middle of August and the coldest day of the year. It’s simply freezing; the dogs are sticking to the sidewalks. Can anybody explain that?

But I’m not surprised. The whole world’s at sixes and sevens, and why the house hasn’t fallen down about our ears long ago is a miracle to me. Every night this same anxiety as to whether the master will get home safely: whether he’ll bring home anything to eat. In the midst of life we are in the midst of death, a truer word was never said. ...

My advice to you is not to inquire into why or whither, but just enjoy your ice cream while it’s on your plate; that’s my philosophy. Don’t forget that we got through the Depression by the skin of our teeth! One more tight squeeze like this and where will we be?
Posted by Lockhart at 10:37 AM