The Killer That Stalked New York (1950) is a wonderful, jazzy title for a fairly pale rip-off of Panic In The Streets, a thrilling noir about the hunt for a killer with plague shot in the streets of New Orleans. Killer That Stalked is based on a real case of a smallpox scare in New York in 1947, which resulted in a mass wave of vaccination. Some smart producer and/or writer had the notion to graft the central premise of Panic in the Streets onto this true story--namely, that the source of the infection would be just the type of person unlikely to cooperate with the officials, being a criminal--and even better, a criminal in mid-crime, that is, waiting for the heat to blow over in order to get rid of stolen goods (in this case, jewelry).

Neither Panic nor Killer qualify as hard-core noir, since there is little element of doom, fate or evil. Panic has a couple of deaths and shootings early on which thicken the atmosphere, but its claim to noir cred mostly rests on the moody photography of Joe McDonald (a favorite of Frank Capra's) and the high-tension lead performance by Richard Widmark. Killer has none of that, being shot in a fairly flat, almost television style, with little point of view. The illustration above demonstrates some of the attitude of the film. All the cops are benevolent Irishmen, and the nurses are gentle and knowing. It is ankle-deep in early 50's Hollywood pap.

Killer has only two possible claims to noir status, one being the presence of Evelyn Keyes, who while not a significant noir figure, is a fairly consistent "bad girl" (perhaps mostly because she's a no-longer-young blonde and because of her long string of famous romances off-screen). She entered the pantheon as Scarlett O'Hara's pouty younger sister, but in Killer she's not especially pouty or especially bad. Just sort of flu-y and sweaty. The other, better claim is the use of New York location photography. Unfortunately, it doesn't amount to much more than some second-unit material, and some plates for Ms. Keyes to walk in front of on a rear-projection stage. Still, it's always fun to see New York 60 years ago, and those little slices here and there provide most of the entertainment value of The Killer That Stalked New York. 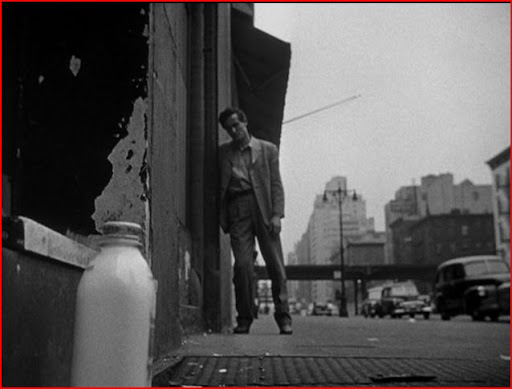 Much more extensive and enjoyable use of New York as a setting is found in The Glass Wall (1953). Like Killer, Glass Wall is not a noir, but a chase film and a suspense piece, but the person running is far more resourceful and determined than in the earlier film. He's a refugee from Communist Hungary without an immigration quota number, desperate to find the American, a jazz musician, who can tell the authorities that he aided the Allied cause during the war, and is entitled to entry. The film boasts excellent location photography by Joseph Biroc, who fought his way through the low-budget swamp of the 1950s, and became something of a specialist in comedy beginning in the 1960s.

Co-writer and producer Ivan Tors had to be a huge influence on the film, also being Hungarian (there is a striking encounter with a Hungarian family late in the film, who argue about their responsibility for the refugee), but also as the future creator of Sea Hunt and Flipper, a fellow who liked to take the camera out of the studio and into the outdoors. Much is shot with available light, and, I suspect, with hidden cameras, since most of the close-ups of star Vittorio Gassman are shot before rear-projection plates, which suggests that they did not want passing New Yorkers to see the cameras, and so kept them far away and under cover. 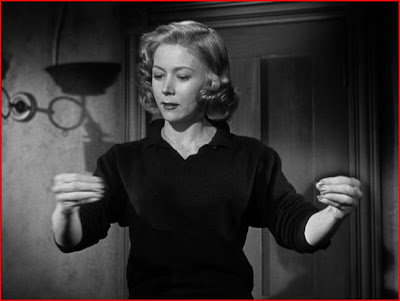 How appropriate to have brought over an Italian actor (albeit playing a Hungarian) to recreate the feeling of Italian neorealism in the streets of New York.

But the element that truly brings Glass Wall closest to noir is the incandescent Gloria Grahame, who breathed guilty sexuality. Most filmgoers remember her as Violet, the girl who is no better than she should be in It's A Wonderful Life, to whom Jimmy Stewart lends money to get out of town away from the gossips, and whose flirty walk makes Ward Bond wonder what his wife is doing.

I don't suspect Gloria Grahame made many moviegoers think of their wives, but the irony is that her characters rarely project sense intentionally, nor even in the fake-innocent manner of a Marilyn Monroe. In Glass Wall, as in most of her films, she plays a lonely, damaged woman who has trusted some wrong men and suffered for it, and yet keeps hope alive, confident she will find a good one. In the illustration above, she is describing her life on the shoelace tip assembly line, part of her rough struggle for survival. The speech and scene is American screenwriting at its best, terse, heartfelt and hardboiled. Incidentally, the set decorators and director had the courage to make Grahame's slum apartment really look like a slum apartment. It may be the shabbiest living space seen in any film in the 1950's.

There's an exciting sequence which could only have been shot on a real New York subway platform (how little they've changed), and even more remarkable from a historical aspect is a brief chase through the still-new and apparently still uncompleted UN building, most strikingly when Gassman's character addresses an empty hearing room demanding justice--and this from a character who has spent ten years in concentration camps before stowing away to America. Perhaps not noir, but unafraid of harsh facts (and McCarthyites) and the reality of being an outsider in America, clawing for a way in.
Posted by Lockhart at 9:45 AM