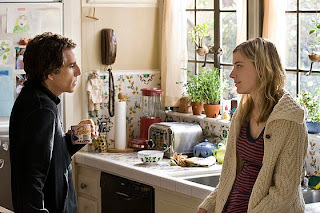 I thought Noah Baumbach's The Squid and The Whale was pretty accomplished. I was especially impressed with how he depicted the effect of a father's narcissism and hypocrisy on his adolescent children. I was also impressed with Jeff Daniels's willingness to play such a horrible person without visibly judging him or trying to distance himself from the character.

Greenberg (2010) has no such merits. It has no special cinematic, literary or performance craft. I mean, the actors say their lines so they can be heard and don't crash into the furniture (or if they did, it has been edited out), but there is nothing much special here. Ben Stiller, an actor who once displayed talent on the Ben Stiller Show, but now is in severe need of someone to pick him up and throw him against the wall very hard, is slightly less irritating in this film in that his character is trying to get better. It has an interesting example of graceless grace from Greta Gerwig, who reportedly has carved out a career in mumblecore, of which Greenberg appears to be larger-budgeted example.

Other than the pleasantly and surprisingly normal Rhys Ifans, the characters are people I would pay money to avoid, especially when they try and exhibit their creativity.

So far, Noah Baumbach's film oeuvre seems about as significant as most of the fiction that used to appear in The New Yorker before it banished fiction. They're enervated, jejeune, solipsistic and use too many big words.
Posted by Lockhart at 2:12 PM