Lights down, lights out 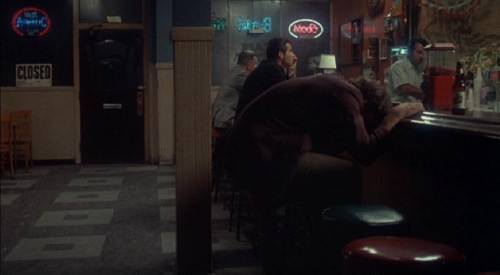 Fat City (1972) is not well remembered now, but it began the John Huston renaissance that continued--fitfully--through his final film, The Dead. It is a noirish little boxing film, sharing much with Robert Wise's The Set-Up: tank town, washed up fighter(s), the women who hang on for better or worse.

There's not much story. The film is all acting, atmosphere and cinematography. And if nothing else, Fat City nails down the relationship between Edward Hopper and film noir. For a boxing picture, little of importance takes place in the gym or the ring in comparison with the Eugene O'Neill-like barroom that forms the emotional center of the film. Here they share their dreams and disappointments, project future triumphs and spill their guts.

Cinematographer Conrad Hall, who made the definitive Hopper-influenced film in his final feature, Road to Perdition, doesn't seem want or need any front light at all. This is on

e of the darkest films this side of The Godfather Part II--it must have been a smeary mess on VHS tape. But it is only appropriate for a film made up of confessions that can only be made under the comfortable blanket of darkness.

It's also a great opportunity to see the young Jeff Bridges, fresh off The Last Picture Show and warming up for brilliant work to come in a line that has peaked lately with Crazy Heart. Here his somewhat soiled, but still innocent optimism is a great contrast with Stacy Keach's air of defeat--personae that are hard to from those of the actors themselves. But then, as a director who loved real locations and non-actors, Huston was the master of the cinematic found object.
Posted by Lockhart at 5:12 PM