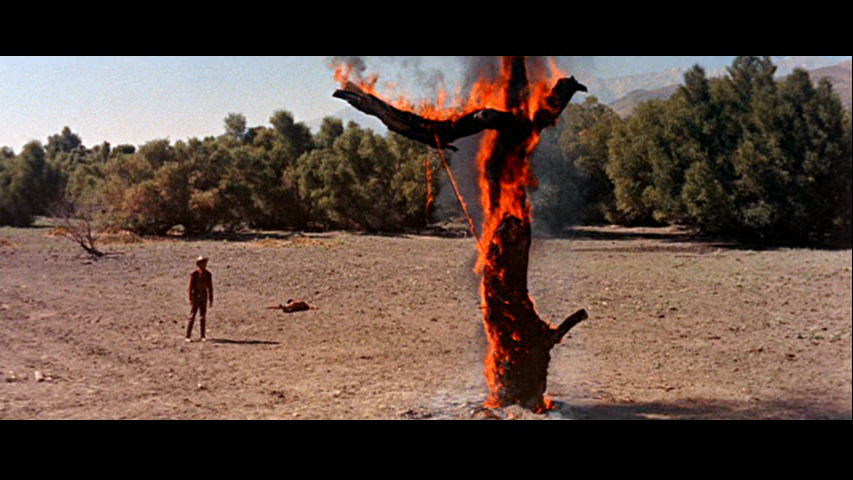 I'll be hard put to write something about Ride Lonesome (1959) and Comanche Station (1960) the last two collaborations between Randolph Scott and Budd Boetticher that hasn't been written elsewhere and probably better before. A few random observations, then, since I cannot sum up either of these films any more than I can tell you why a Haydn String Quartet is exquisite. And these films exude that kind of classical perfection.

[Side note: Film buffs should retire the inaccurate and uninformative term "Ranown Westerns." First, only Ride Lonesome and Comanche Station were actually produced by a company called "Ranown," but the term is used to describe several other films in addition. Second, the joining of Randolph Scott and Harry Joe Brown's names inflates the importance of Mr. Brown. The latter was a fine low-budget producer, with credits going back to before 1920, but the films that buffs want to talk about are the 5 to 7 that Scott made with director Budd Boetticher. Scott and Brown made at least 9 other potboiler Westerns together without Boetticher, and while these are acceptable time-passers, they are not worth analysis and reverence. More sensibly, we should talk about the three great Western director-actor collaborations: Ford & Wayne; Mann & Stewart; Boetticher & Scott. The latter team has very little to do with Harry Joe Brown (who probably did little more than set up the financing and distribution for these films). Scott and Boetticher effectively co-produced most of the series.]

One of the main lessons a contemporary filmmaker, especially in the low-budget field can take from these films is the economy of shot-making. Over and over Boetticher does some storytelling, character development and transitions all with a single shot and one simple camera movement. Just look at the arrival of villain Lee Van Cleef in Ride Lonesome at the abandoned station. The riders arrive from the distance, ride into a medium shot. Van Cleef has a line that indicates his intelligence and his doggedness, the riders change direction without dismounting and we have moved from one act to the next in a single well-designed shot. This happens over and over, especially in the final sequence of Lonesome. It's as though Wyler started directing genre westerns. (Incidentally, shots like that save a lot of time when you have experienced actor and crew. It's also worth nothing that neither of these films have ANY interiors. That's right, no sets at all. That's how you make a movie in 13 shooting days.)

And Boetticher and writer Burt Kennedy know how to craft a rich and complete story with only about six characters in each film--which is both economical both in dollars and in storytelling. Ride Lonesome is distinguished for its most rounded and believable would-be villains; that is, Pernell Roberts and James Coburn (in his film debut), two brothers who aim to thwart bounty hunter Randolph Scott from bringing in his prisoner. Their aim is not evil--they are hoping by bringing in the prisoner themselves, they can get amnesty for some previous scallawaggerry and begin "straight" lives as ranchers.

Coburn's skill sparked Boetticher and Kennedy to write more lines and scenes for him during production, and it is hard to think of such a poised and skillful debut by an actor, albeit playing a simpleton compared to his later characterizations.

Kennedy really achieved a kind of poetry in his efficient yet evocative dialogue for these films. Here are some examples from Comanche: "Ma'am, if you was mine, I'd of come for you even if I'd of died in the doin' of it." "He rides a little on the gentle side. Maybe too gentle." "A man can break with the wild life."

On the other hand, all of the first 9 or 10 minutes of the film are without any English language dialogue whatsoever, and they are a master class in visual storytelling, as Scott trades with the Indians for a white woman. In a lovely bit of poetic symmetry, the final sequence balances the opening, by bringing this woman back to her blind husband.

But I warn you, these films trade in ironies, but not cynicism. It might be too much for a 21st-century audience. [If you'd like to watch Comanche Station yourself, click on the picture above.]
Posted by Lockhart at 3:43 PM