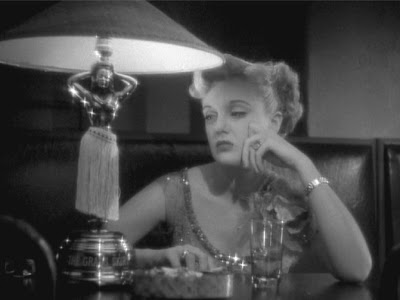 Mystery Street (1950) is a film noir set-up with a documentary procedural resolution. The film begins with the best noir credentials: low-key lighting, seedy settings, a woman who's no better than she should be, a hapless fall guy who's briefly fingered for a crime he didn't commit, and John Alton behind the camera to certify the film's noir cred. One image which appears early in the story is virtually iconic: a killer whose face is unseen begins to remove his female victim's body from the car in which he has shot her. Another car starts to come around the bend--we see its headlights start to sweep around. The killer picks up the woman's limp body and drapes it around himself as if they were in the throes of passion. Sex and death are always intertwined in film noir, but rarely so literally. In a moment, that body is hoisted over the killer's shoulders and the victim's lovely arms sway as he carries her off in a virtual pas de deux of death.

Then the film begins another strain which was popular with crime film of the postwar era, the Louis deRochement-location shot-documentary-style procedural. We are treated to Boston backgrounds (which are kind of fun to see 60 years later), a Harvard professor introducing us to the concept of a forensic lab and Ricardo Montalban as an eager-beaver cop, without any noir ambiguities, or even any backstory (except that he comes from a Portuguese neighborhood, hence his Mexican accent).

Even though this material echoes present-day television programming, some o

f it must have been startling to a 1950 audience, such as the unflinching display of partial skeletal material. And there is a terrifically chilling image as the technicians project an image of the skull they have found behind the pictures of possible victims for identification purposes. Then comes the moment (pictured at right) when the skull lines up perfectly with Jan Sterling's face and we have not only put a name to the victim, but seeing death in life quite literally.

Curiously, much of the plot turns around a man who is wrongly accused and the wife who wants to see him exonerated. But the film turns its back on him early on (and the wife, who is the nominal lead only enters the film after the halfway point and only has a few scenes and not any major emotional ones) in favor of the investigation. It is almost as if the film is saying, 'This is MGM. We're not going to roll around in miserly like those grubby little RKO and independent movies. We're going to show that the police are good and hard-working and well-meaning and will find the truth." As is usual, films that best serve their audience in their own time are the least likely to find a foothold in posterity.
Posted by Lockhart at 7:47 PM