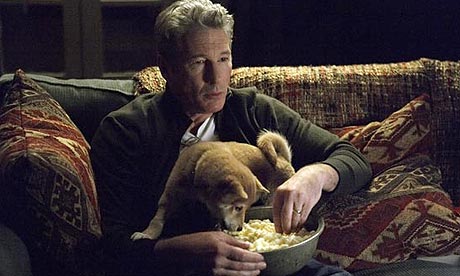 Hachi (2009) is one of those movies "they" don't make anymore. When I was a kid we had Old Yeller and Greyfriars Bobby and the Incredible Journey animals (the stark black-and-white original, not the goofy remake with movie star voiceovers). For a G-rated film like this, about loyalty and persistence, and greater values in life than the acquisition of money and status (the humans in the film are artists and teachers), it had to be a passion project.

And Lasse Hallstrom, still most famous for the immortal My Life As A Dog, was the perfect director. That film was not about a dog, but about a boy who longed to be one, or indeed to be anything than what he was, a little boy whose mother was dying. Both that film and Hachi have the knack of showing the point of view of ordinarily neglected figures--a little boy, a lost dog--who do not or cannot express themselves verbally. In Hachi, that point of view is expressed in dog-level POV shots with desaturated color (to represent a dog's color blindness, presumably). Curiously, as the film progresses, and we get to the heart of the story, the dog waiting faithfully for 9 years for a master who will never return, we lose the point-of-view shots, as if in recognition that the story's impact relies on a human perspective. After all, we don't expect humans to be loyal and persistent. It is the contrast between the dog's behavior and our expectations (and knowledge) of each other that makes the dog heroic in contrast.

Like the classic European directors we fell in love with in the 50s and 60s, Hallstrom doesn't need much story to make an engaging film. It does feel thin around the one-hour mark, but finishes strongly, walking that fine line of honest, decent sentiment without sentimentality. And yet, although I liked the film, it felt weightless. There is nothing to the relationship between man and dog but their relationship. There are no special circumstances binding them together, whether shared hazards or service or even attachment to some third party, human or otherwise.

Curiously, one of the most touching moments belongs to Joan Allen, playing Richard Gere's widow, who happens upon the dog many years into his vigil waiting for his never-to-return master. Allen's character never seems to have bonded closely with the animal, and she approaches it, perhaps hoping for some connection due to their shared loss. The animal looks at her uncomprehendingly, but does not move or shy away. Allen says, "I'll just sit with you until the next train comes, if that's alright." The dog gives its tacit permission, never veering off its focus on the door through which its master may yet arrive. There is a silent acknowledgment that, as much as it is healthy for us to move on, those who cannot may be admirable in their own way. (Take that, Lovely Bones!)
Posted by Lockhart at 4:25 PM