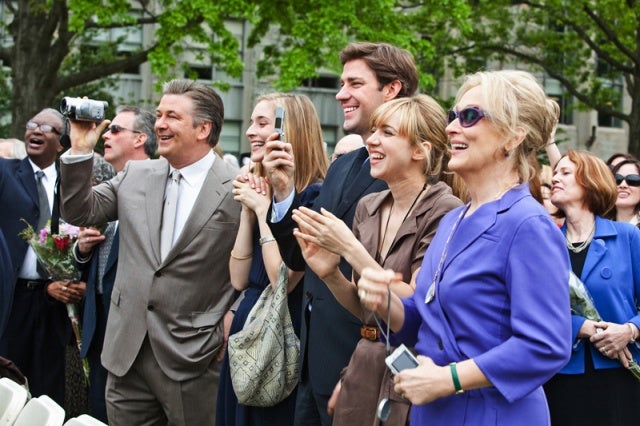 It's Complicated (2009) appears to have been written and directed by Sonoma-Williams and dedicated to the proposition that 60-year-old women are likely to own successful businesses (which they don't have to spend any time running), have their children attend prestigious colleges without wondering how to pay for them, and have two well-heeled men chasing after them. And they say men have sick fantasies. (Yes, I know Meryl is supposed to be in her 50's, but I went to her high school and I know how old she is.) Writer-director Nancy Meyers continues to prove that she is the economy brand of the Nora Ephron franchise, with her characters suffering from mild body issues in place of Ephron's character's full-blown neuroses.

The film is pleasant, but no more and the only really remarkable thing about it is the skill and detail of Meryl Streep's acting, skill and detail she no longer applies to her celebrated character roles in films like Doubt and Julie & Julia. The latter have degenerated into vaudeville turns of tics and mannerisms. Streep's performance in Complicated is full of small realistic touches which are not in the service of a joke or a plot point, but simple pure characterization, revealing a character's insecurities, self-deprecation or indecision. Nonetheless, she is far less likely to be nominated for a piece like this than she is for playing an obvious gargoyle like in Devil Wears Prada.

John Krasinski is the film's secret weapon in the inconsequential role of the daughter's fiancee. Away We Go, which featured his best leading role so far, and was one of the best films of 2009--a film which gives you faith in the future of movies, virtually disappeared from everyone's mind by the time award season came around. Someday someone is going to realize that he is our new Jimmy Stewart, Jack Lemmon and Tom Hanks and his goofy charm is going to drive some major films in years to come.
Posted by Lockhart at 12:01 PM