Movies are getting pinker 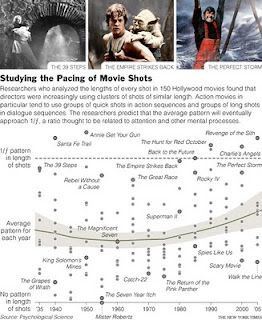 A recent article in The New York Times describes how researchers have found that film editing rhythms have changed in recent years. Yes, they've gotten faster and shots have gotten shorter. Everyone knows that.

What's more interesting is that since 1960, cuts are coming at a rate which is more regular and more comfortable, and more closely aligned to the way we perceive the world around us naturally. Metaphorically, the speeds of the cuts correspond to the beats of our hearts, or at least the pulsations of our eye-brain connections.

Of course, a director or an editor might prefer to be jarring. For a film such as In The Loop, one might one to cultivate an air of "naturalness" to enchance the simulated reality and add a layer of comfort to its prickly comedy; OR one might one to make the film disorienting and disturbing so as to subliminally warn the audience: "weird and wrong stuff is happening here."

Presumably, this trend makes more recent films "easier" to watch. Does it make them more rewarding? (P.S. In order to understand the title of this post, you're going to have read the Times piece.)
Posted by Lockhart at 11:25 AM