My first thought on seeing Tim Burton's new interpretation of Alice in Wonderland (2010) is that although the Disney company was not integrally involved, (as far as they know the project was largely developed by Joe Roth, who has a production deal at Disney, but is not an employee) it achieves one of Walt Disney's personal goals: to seamlessly integrate animation and live action. Here the animation is 3D (that is, the figures are modeled by computer rather than drawn--the 3D exhibition is a separate issue), and the blending of live-action performance skills with traditional animation performance and movement skills seems absolutely complete. In some cases, such as Helena Bonham-Carter's Red Queen, the actress herself has been turned into a partial cartoon, recognizable yet distorted (reminiscent of what Disney animators did with Ed Wynn's appearance in their version of the Mad Hatter in the 1951 film.) 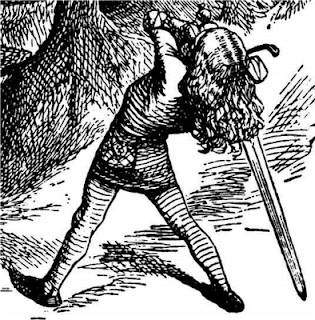 he film. Carroll's books neither had nor needed plot. They are odd improvisations in nonsense and veiled satire, never meant to be anything other than an intriguing diversion. It is hardly novel to note that while dramatic structure is virtually a necessity in works which unfold over time (theater, films, music) it is not a sine qua non for the printed word. The hinge seems to have been a look at Tenniel's illustration of "Jabberwocky." While Carroll's poem refers to an unnamed, but male hero, the film's creators could have looked at this view and said, "Why couldn't this be a teen-aged Alice?" (Note "Joan of Arc" imagery in the illustration at top.)

Not surprisingly, what they came up with is a coming-of-age story, and a female empowerment one as well. Again, the purists are upset that Burton's Alice is a 19-year-old who knows a few things and is unwilling to accept arbitrary authority. Personally, I found it refreshing. Carroll's Alice is a tedious little literalist, constantly battling the enchanting nonsense all around her (in exactly the way a 6 or 7 year-old would), which pits her against what little narrative thrust the stories have. At least in "Looking Glass" she has a clear goal of trying to find her way back (and trying to find out what "Jabberwocky" means).

The motor underlying Alice's quest journey in the Burton film is an understanding of the use and misuse of power. The Red Queen (who is an amalgam of Carroll's Red Queen and Queen of Hearts) attempts to use power arbitrarily and cruelly. The Mad Hatter has abdicated his; the Dormouse acts as if he can wield power when he has none; the list goes on. Finally, the Jabberwocky derives most of its power from the fear of those observing it. Alice conquers that, and she conquers the fear of being different or disruptive in her own buttoned-up Victorian era. Yes, the conclusion is improbable, but consistent and satisfying.

The 3D projection resembles Viewmaster. It is fun, but I suspect the film's imagery is perfectly enjoyable "flat" which could not be said for Avatar, which was clearly conceived to be be immersive.

A quibble: I enjoyed the Mad Hatter's silly dance of victory, but did it have to be done to a contemporary beat track, which nails the film down to a particular time? Foolish mistake.

An appreciation: The frabjous day and the frumious bandersnatch (which figure prominently in the film) have been rescued from semi-obscurity. The mome raths outgrabe!
Posted by Lockhart at 6:53 AM