2012 (2009) is to filmmaking what Demolition Derby is to actual auto racing. It's just a lot of stuff blowing up and falling down and it's a lot of fun and it doesn't improve your mind or your soul or teach you anything about anything, no not one little bit.

It's common to trace disaster porn back to The Poseidon Adventure (1972) and the disaster films that trailed it in the 1970s. But really the impulse goes back farther, at least to the early 50s, when we were being regularly attacked by Martians in walking cylinders or grouchy awakened dinosaurs or giant ants or indefinable blobs. Whether it was the end of World War II or the beginning of the Cold War, but we sensed pretty well that the jig was up, and that security was purely an illusion. And back then, if the producers could have convincing blown up the whole world, they would have done it. (They did so, albeit offscreen in Kiss Me Deadly and Dr. Strangelove).

But now we can really show it--at least well enough to convince our 2009-10 eyes, although who knows how primitive and hokey this film will look in 10 years. (One of my problems with both African Queen and The Birds is that their unconvincing effects made the entire premises of the films hard to swallow).

There was a lot of talk when the film was released last fall that it had something to do with Mayan predictions of disaster, and there was a lot of talk about what we're doing wrong. But this isn't one of those If Only We Had Listened To The Scientists In Time movies. The whole reason the Earth is imploding is tossed off in a couple of minutes and doesn't seem to be important to anyone except one schmuck Indian scientist who gets wiped out in a tsunami. So there.

The final proof that the film is after nothing but cheap thrills is the heavy reliance on wellworn story tropes. Seriously--a character says, "There's something coming between us" and a giant chasm opens up between them. As they say on SNL, "Really?" In fact this page at TV tropes.org lists literally dozens of hackneyed story tropes that 2012 employs with 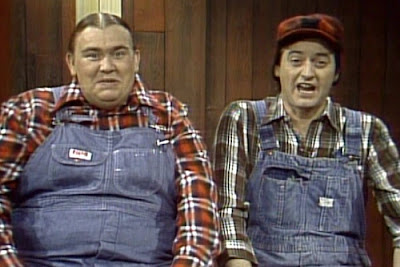 downright glee and complete contempt for concepts of originality and insight into the human condition.

In the words of Big Jim McBob and Billy Sol Hurok, "They blowed up real good."
Posted by Lockhart at 2:45 PM