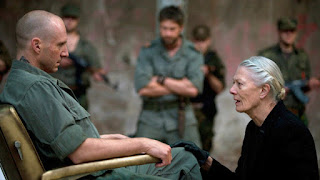 No sense in being coy about it:  I would place Ralph Fienne's adaptation of Coriolanus (2012) among the top four or five Shakespeare films which are real movie-movies, not recordings of stage productions and which require no preparation and no excuses.  (If you want to know, Welles's Othello and the Ian MacKellan Richard III are among the others Oh, and by the way, that guy Shakespeare has 869 credits in imdb as I write this.) When I sat down to watch the film, intimidated by never having read the play, I turned on the titles.  Unnecessary.  Completely unnecessary.  My guess is that Fiennes ruthlessly pruned whatever poetic flights the play has in favor of utter and complete clarity, which he achieved.

As I look through the reviews and discussion of the film, I can't claim to have observed anything much that other writers haven't.  Perhaps it was because taking in this story of power, politics and betrayal for the first time was rather overwhelming.  It will certainly re-pay re-viewing.

Obviously, choosing cinematographer Barry Ackroyd of Hurt Locker fame was central to the conceit, which places the story in a vaguely Eastern European war zone.  Fiennes also did something so many stage-experienced directors fail to do, which is cast visually distinctive actors in the supporting roles so as to help the viewer keep track of who's who.  There was some criticism of the use of cable news talking heads, but to me they are a perfect analogy to the play's choral characters.

But the film's raison d'etre is the performance of Vanessa Redgrave, playing an exemplar of that strange species, the mother of a Roman General.  I would argue that this is her best work on film.  She conveys a steely strength which is not so much cruel as it is heedless of ordinary considerations of human relationships, because the Roman noble household is all about power, the getting and maintenance thereof.  If Coriolanus doesn't make it into the time capsules on its own merits, it will surely be represented as a landmark in Redgrave's great career.

And, hey, what a year Jessica Chastain (Tree of Life, Take Shelter, The Help), has had!