What is left unsaid 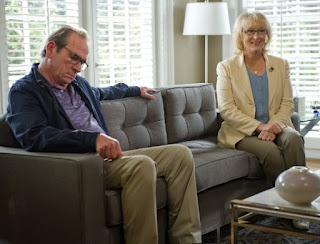 It is fascinating to see film writers go after what they consider implausible in the couples-counseling-comedy Hope Springs (2012), a procedure they would never consider undertaking for, say, the latest installment of the Batman franchise.  That is because they think that movies obey different rules according to genre, but the fact is that all narrative adheres to the rules of narrative, and genre merely denotes the existence of conventions, merely a framework of expectations between audience and filmmakers, not a genuine difference in the rules of storytelling.  So it is not necessary to debate the real-world plausibility of this kind of film, but merely examine its consistency according to the rules it sets up for itself.  But because Meryl Streep and Tommy Lee Jones do not dress up in black rubber suits and ride in a jet-powered automobile, the critics seem to expect Hope Springs to be some sort of documentary, rather than an entertainment.

What is remarkable about a film driven by its script and acting is what it accomplishes by non-verbal means, and by that I don't mean merely the panoply of grunts and shrugs that make up Tommy Lee Jones's performance.  Most especially there is the mise en scene, from the careful calibration of familiar middle-class locales--the home with too-large simulated antique furniture, the spare EconoLodge room, the fussy but delightful New Englande Inne, the spruced-up shabbiness of a New England town undergoing a mini-boom.  There is the extremely careful costume design by theater great Ann Roth, particularly for Meryl Streep's Kay, who nervously vacillates between revealing herself as a woman and trying to cover herself and disappear into the woodwork.  (How interesting that Roth emphasizes Streep's weak point as a film actor--her too-small eyes, by giving her heavy-rimmed glasses to hide behind, so as to better bring off the reveal when those glasses come off and we get a gander at Meryl's baby blues.  And additional kudos to Ms. Streep's hair stylist, who offers similar character hints.)  And I would guess that Tommy Lee Jones's wardrobe was bought entirely at Sears and/or Kohl's, while Steve Carell has been outfitted at L.L. Bean and Eddie Bauer, as would be appropriate for a casual professional in Northern New England.

But the greater challenge is the sequence of scenes in Carell's office which are the principal expositional device.  Although there must be at least six or seven of those scenes in the same locale, never once is it lit in the same way, altering not only the pattern of light and shadow but the color temperature, which lends variety to the costumes and even the actors' skin tones.  It would be interesting and instructive to lay screen grabs of all of the office scenes next to each other to see what cinematographer Florian Ballhaus, with the collaboration of production designer Stuart Wurtzel, has done to reinforce and illuminate the narrative thrust of each of those very different scenes.  They range from a warm and sunny red-to-yellow range after the couple has had a rapprochement to a virtual film noir Venetian blind-shadowed look when they are closest to crisis.  And I wonder how much of the audience even noticed.

The most frequent criticism of the film is that its resolution seems unmotivated or unexplained.  I think what people are feeling but not saying is that the resolution is not verbal, not logical and rationalized.  It is the product of non-verbal, nay pre-verbal passion, the very basis of all such relationships.  Such things are not easy to dramatize, and perhaps this one was not well prepared, but it doesn't change the fact that for this viewer, who has lived and been married about the same time as these characters, the ending made perfect sense to me.  Essentially, Jones's character says to himself, "the hell with what I've been fronting all these years, it's better to just be happy.  Never complain, never explain."

The final vows on the beach are utterly charming--I urge you to stay through the whole film.  But I can't think of a beach in Maine that looks anything like the one in film, not surprising since it was shot in Connecticut.  And after all, what would "Hope Springs" be doing in Coast Maine?  Natural springs virtually never occur that near the shoreline of the ocean.  This is a landscape of the heart.
Posted by Lockhart at 12:09 PM